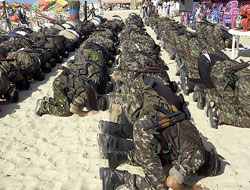 A radical Islamic group in Somalia said it will fight the pirates holding a Saudi supertanker loaded with $100 million worth of crude oil. Abdelghafar Musa, a fighter with al-Shabab who claims to speak on behalf of all Islamic fighters in the Horn of Africa nation, said ships belonging to Muslim countries should not be seized. In the past two weeks Somalia's increasingly brazen pirates have seized eight vessels including the huge Saudi supertanker. Several hundred crew are now in the hands of Somali pirates.

The pirates dock the hijacked ships near the eastern and southern Somali coast and negotiate for ransom.
Saudi Arabia's foreign minister said Friday that the Saudi government was not and would not negotiate with pirates, but what the ship's owners did was up to them.

The Somali pirates have the support of their communities and rogue members of the government. Often dressed in military fatigues, pirates travel in open skiffs with outboard engines, working with larger ships that tow them far out to sea. They use satellite navigational and communications equipment and an intimate knowledge of local waters, clambering aboard commercial vessels with ladders and grappling hooks.
They are typically armed with automatic weapons, anti-tank rocket launchers and grenades -- weaponry that is readily available throughout Somalia.

Also Friday, one of the world's largest oil tanker companies warned that it may divert cargo shipments, which would boost costs up to 40 percent.

Frontline Ltd., which ferries five to 10 tankers of crude a month through the treacherous Gulf of Aden, said it was negotiating a change of shipping routes with some of its customers, including oil giants Exxon Mobil, Shell, BP and Chevron.

Martin Jensen, Frontline's acting chief executive, said that sending tankers around South Africa instead would extend the trip by 40 percent.

Bermuda-based Frontline plans to make a decision whether to change shipping routes within a week, Jensen said.

"It's not only our costs, but also those of the people who have a $100 million cargo on board," Jensen said. "We're not going to make a unilateral decision so we've been debating this with our customers."

A.P Moller-Maersk, the world's largest container-shipping company, on Thursday ordered some of its slower vessels to avoid the Gulf of Aden and head the long way around Africa.

Norwegian shipping group Odfjell SE on Wednesday ordered its more than 90 tankers to avoid the Gulf of Aden because of the risk of attack by pirates.

This news is a total 1044 time has been read