Isle of Man registry ramps up flag promotion in Asia 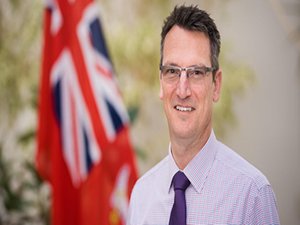 For a small island in the middle of the Irish Sea, the Isle of Man has achieved a remarkable presence in the global shipping business.

Earlier this year, Clarkson Research had the Isle of Man Ship Registry at number 17 in the world, just after Italy in tonnage terms and way ahead of South Korea and the United States.

The island’s capital, Douglas, is the home port to about the same number of gas tankers and bulk carriers as are listed on the Norwegian International Ship Register.

The Registry has held top spot on the Paris MoU Port State Control whitelist and is firmly on the whitelist in the Tokyo MoU rankings. It is also one of the high-performing flags on the US Coast Guard’s Qualship 21 scheme with a low average rolling detention rate of just 0.48%.

DNV GL Cameron Mitchell, a marine engineer who served at sea with companies including Maersk and Farstad and has since developed broad shore-based marine experience, took the helm as Director of the Registry in March 2019.

Together with colleagues, he is spearheading a drive to expand flag registrations across Asia.

This, he says, makes sound business sense since the vast majority of ships are built in the shipyards of China, Japan and South Korea, and some of the world’s largest shipping companies operate out of Asia’s key maritime hubs, including Hong Kong, Singapore and Tokyo.

Although the Registry’s client base is traditionally European – with Greek owners a very important contingent – about two-thirds of Isle of Man tonnage is now managed from Asia, and the percentage is rising.

Mitchell reveals that the Registry’s full-time representative in Singapore is soon to be supported by Registry personnel heading regional offices in other locations including China, Hong Kong and Japan.

Mitchell is keen to point out some of the reasons why owners from all over the world are clearly attracted to the island, which is neither part of the UK nor a member of the European Union.

It is a self-governing British Crown Dependency which means that ships registered there can fly the Red Ensign, the British flag, modified to reflect the Isle of Man’s own three-legged ‘triskelion’ symbol, which probably dates from Norse times more than 750 years ago.

Membership of the Red Ensign Group (REG) comes with a range of benefits including joint policy-making initiatives and permanent representation at the IMO in London, together with the UK and other REG members.

The Registry can delegate functions to any Recognised Organisation approved by REG members, notably all of the main classification societies.

And, with the flag’s Crown Dependency status, seafarers and registered ships can rely on British support at any time anywhere in the world.

Mitchell is also keen to stress some of the Registry’s unique features. Since it is targeting a global market, he is keen to point out that the competitively priced Registry offers a 24/7 service and out-of-hours registration to suit anyone around the world at any time.

This proves popular not only amongst commercial shipping clients, but also with the large number of superyacht owners who register their vessels in the island.

The Registry provides simple and speedy seafarer documentation, usually within a day. It has in-house technical expertise constantly available and is a preferred flag amongst financiers and insurers.

It is certified to ISO 9001:2015 and ISO 14001:2015 environmental standards and its growing popularity has underpinned the development and growth of a wide range of maritime services including ship management, ship finance, marine insurance, legal services, chartering and training.

These features are appealing enough on their own, but the fact that companies can operate from the Isle of Man’s tax-free environment is a major pull.

In May this year, the capesize bulk carrier, Berge Zugspitze, successfully underwent a remote annual survey at the anchorage off Port Hedland in Australia.

Live interactive video during the five-day survey was streamed simultaneously to DNV GL surveyors in Singapore and Registry surveyors on the Isle of Man.

In a separate initiative, the flag authority has just launched the first-ever seafarer welfare app, developed specifically for the 11,000 seafarers on board more than 400 ships flying its flag. As an ex-seafarer himself, Mitchell is only too aware of the mental hardship that is often a challenge for seafarers and has become a major issue during the pandemic.

“Seafarers are supported by some fantastic charities in ports, but out at sea, it’s a very different story,” Mitchell says.

“Our app has many features but a key aim has been to encourage social interaction on board to combat the isolation that can so easily turn into full-scale depression, particularly at times of major uncertainty that we have experienced recently.”

This news is a total 2545 time has been read
Tags: Isle of Man registry ramps up flag promotion in Asia