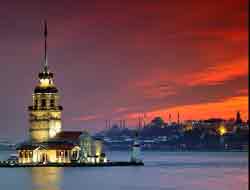 John Borthwick of The Sydney Herald Tribune, a writer and photographer, says your day in Turkey's most glorious city should begin with a Turkish coffee...

'ISTANBUL, the big old blowzy babushka of the Bosphorus. I love it!' says Gabby Malpas, a frequent visitor from Sydney, who trawls the city's bazaars.

It is almost mandatory for visitors to "do" Istanbul's Covered (Grand) Bazaar - if not to also get "done" there sometimes. The bazaar's 118 ancient colonnaded alleys shelter some 4000 stalls and almost as many touts.

Within its labyrinth you can find every possible element in the periodic table of gift shopping: gold, silver, silk, meerschaum, leather, onyx, antiques-to-order and excess baggage brassware.

"At times, while walking through the infinite and winding streets of Istanbul . . . I feel I'm living the present as if it were the past," says a character in the novel My Name Is Red by 2006 Nobel laureate Orhan Pamuk.

Whether in a spice bazaar or a five-star hotel, this sensation of straddling epochs can seem as acute for a first-time visitor as for a lifelong Istanbul aficionado such as Pamuk.

Your day in Turkey's most glorious, sometimes notorious but best fun city should begin, appropriately, with a Turkish coffee as thick as the spoon that almost stands up in it.

Chances are you'll be sipping that coffee, or the one after it, in the area known as Sultanahmet. So named because of the famous Sultan Ahmet Mosque, whose domes and six minarets tower over it like a divine tracking station, the area is dense with cafes, carpet shops, bazaars, samovars, tourist coaches, boutique hotels and even a pair of 4000-year-old Egyptian obelisks.

Sultanahmet's main attraction is its namesake mosque, often known as the Blue Mosque. Since the renovators were called in about 20 years ago, the soaring interior of the mosque's million-tile ceiling now seems more red than blue, but its "sacred stillness" (as Lonely Planet says) remains undiminished.

Nearby is the massive, equally dramatic but much older Hagia Sophia (or Ayasofya or Sancta Sophia), built some 1470 years ago.

Once the holiest church in Christendom, if not the hub of the Eastern Roman Empire, it later became a mosque and is now a World Heritage-listed museum. While honouring both of its earlier creeds, Hagia Sophia is now a major pilgrimage site for the new religion of tourism.

Still on the historic promontory that's hemmed by the Bosphorus and the Sea of Marmara, you'll come to the celebrated Topkapi Palace. Allow lots of time for this one, the home and throne of the Ottoman sultans.

Follow its Byzantine threads of life, death and diamonds through lavish chambers and harem rooms. Among them you'll find the Spoon Maker's Diamond, an egg-sized, 86-carat sparkler that throws off reflections like a mirror ball. Elsewhere are alleged relics that sometimes strain your credibility, such as the rod of Moses, Muhammad's sandals, the sword of King David and even Abraham's saucepan.

The homes in Istanbul radiate from the European and Asian shores of the Bosphorus. The closer you get to the city's fulcrum, the Golden Horn and Galata Bridge, the denser the layering of antiquity and modernity, not to mention humanity and traffic jams.

Anything you see might be 15 centuries or 15 minutes old. And that's the point of Istanbul: you stand on its shore and know that the boats of Greeks, Persians, Romans, Vikings, Venetians and Ottomans passed this way, as some 150,000 ships a year still do.

The Bosphorus is a 32-kilometre nautical freeway that bisects the great city, funnelling the Black Sea down to the Mediterranean. Local ferries scamper every which way on it like water bugs. Many of these hardy tubs resemble hotted-up old Manly ferries.

Join one at the Galata Bridge and head up to trendy Ortakoy or out to the snoozy Prince's Islands. A journey might take from 10 minutes to two hours, depending on your destination. Fares start at 1.3 Turkish lire ($1.60).

On board you can retreat from the overexcitement of Istanbul, relaxing with hot tea and pretzel bread served by wandering vendors.

The shore is lined with old wooden mansions, a few mosques and Byzantine churches, plus the occasional stretch palace such as the 1856 Dolmabahce, the final flings of the last foppish Ottomans.

The Prince's Islands, nine kilometres from Istanbul in the Sea of Marmara, were once a dumping ground for disgraced Byzantine princes. Buyukada - "the big island" - is the largest and most beautiful of this nine-island group. The ferry trip here takes about an hour but Buyukada's isolation and tranquillity is underlined by the absence of cars - there are just bicycles and horse-drawn carriages. Wait until you see a local clopping past the elaborate wooden mansions of yesteryear while standing on his dray with a mobile phone clamped to his ear.

Since the mid-19th century Buyukada has been a summer retreat for Istanbul's leisured classes. The elegant homes and yali - "shore houses"- of earlier generations are now being restored, but the influx of new money and weekend daytrippers packing the fish restaurants hasn't furrowed Buyukada's calm brow.

The Splendid Palace Hotel, built in 1906 and modelled on the Hotel Negresco in Nice, is the most elegant and historic of the island's numerous small hotels. Most accommodation here is booked out in the high summer months of July and August.

Back on the mainland at Galata Bridge, duck below its chaotic traffic deck to the restaurants downstairs to snack on crunchy grilled tuna and hot apple tea.

Ahead, uphill, is the first, or last, ridge of Europe. Behind you are hills studded with Istanbul's seven great mosques and their nimbus of domes and minarets. It feels like standing between the high water marks of the caliphate and Christendom.

Meanwhile, further away, the Asian shore's ridge line bristles with telecommunication and microwave towers, the minarets of our more recent devotion.

The Karakoy-Beyoglu area boasts several oddities, one being the world's shortest subway, built in 1875. You travel its uphill journey of 560 metres in just one minute and 15 seconds. Another curiosity is the circular Galata Tower. Looking down from it, imagine the first man ever to fly as he leapt from here. Turkish legend says he did so in the 17th century, winging across the city in an early hang-glider.

Many tourist hotels are located around here in the Taksim/Beyoglu and Pera districts. One of the most famous is the 1890 Pera Palas Hotel, a formidable dowager of iron lace and belle epoque grace that saw much Great War intrigue.

Agatha Christie penned Murder On The Orient Express in a suite here that is now named after her. The main drag through this area is Istiklal Caddesi, a long pedestrian street connecting three important squares, Tunel, Galatasaray and Taksim.

This is the historic European jugular of Istanbul, lined with churches, consulates and grand apartments. Today it is a happy hunting ground for shoppers. It is also the place to be for night-life. Nevidzade Street, off Istiklal Caddesi, has a score of seafood cafes, thronged nightly with diners. Kick on to the upmarket rooftop nightclub (on Istiklal Caddesi) called 360 - as in degrees of view.

Here, overlooking this glittering city on the cusp of Asia and Europe, it strikes you that vigorous, intriguing Istanbul still delivers more life in one day than most other cities in a month.

TRIP NOTES Melbourne-based Turkey specialists Icon Holidays offers quality accommodation ranging from the Eresin Crown in Sultanahmet (from $168 a night) to the sumptuous Ciragan Palace Kempinski right on the Bosphorus shore (from $290). Private guided day tours on the theme of Classic Constantinople or Spices, Ships and Sultan start at $269 a person. Phone (03) 9810 7666. See http://www.iconholidays.com.

While 96 per cent of Turks are Sunni Muslims, fundamentalist intolerance is absent in cosmopolitan Istanbul. You may drink alcohol and wear conventional Western clothing, just like the locals.

English is widely spoken in all major tourist precincts, but your attempts in Turkish at "hullo" (Merhaba), "goodbye" (Allaha ismahladik/gulay gulay) and "thank you" (teshekuler) will be appreciated.

Allow plenty of time for even apparently short road journeys. Sometimes the traffic speed is glacial. The usual transport for visitors is the yellow metered taxi. They're everywhere. (They have improved since 18 years ago when one driver told me: "We don't have licences - if you dare drive, you may.")

Weather-wise, the best times to visit are May-June and September-October. July and August can be furnace-hot, while December-February can be cold to the point of snowing. Bring an an umbrella or raincoat at any time.

Pack walking shoes. Istanbul is best experienced as a walking city where, in the space of a few blocks, you can stroll across the epochs from Istanbul to Byzantium and back via Constantinople. Source: The Sun-Herald

This news is a total 7687 time has been read