It must boost aid 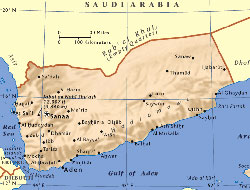 The world must recognise that if Yemen is not to fall apart like Somalia, it must boost aid to the impoverished state despite the global recession.

The world must recognise that if Yemen is not to fall apart like Somalia, it must boost aid to the impoverished state despite the global recession.

The world must recognise that if Yemen is not to fall apart like Somalia, it must boost aid to the impoverished state despite the global recession, officials, diplomats and experts in Sanaa believe. "Look at the Somalis -- (a few) million people, and they are creating problems for the world," Deputy Premier for Economic Affairs Abdulkarim Ismail al-Arhabi told AFP.

Somalia-based pirates have plagued international vessels plying the shipping lanes of the Gulf of Aden separating Yemen and Somalia, a strategic waterway to and from the Red Sea and Suez Canal.

Pirates attacked more than 130 merchant ships in the Gulf of Aden last year, more than double the 2007 total, according to the International Maritime Bureau.
"Yemenis are 24 million and (they are) tough warriors. And they've nothing to lose, like the Somalis," added Arhabi, also minister of planning and international cooperation.

Already "used to poverty," in the words of one diplomat in Sanaa, the people of the poorest country in the Middle East can expect even more hardship as the worldwide downturn has drastically cut oil prices.

Hardship can breed extremism, and Yemen has a history.

The Arabian Peninsula state is the ancestral homeland of Osama bin Laden, and his Al-Qaeda group has launched many operations there -- notably the 2000 attack on the USS Cole in the port of Aden that killed 17 sailors.

Admiral Mike Mullen, chairman of the US joint chiefs of staff, said in December he was "extremely worried" about potential safe havens for extremists in both Somalia and Yemen.

"I try to pay a lot of attention to the evolution of potential safe havens, these two in particular," the top US military officer told a Pentagon news conference.

According to Ali Saif Hassan, director of the Sanaa-based Political Development Forum (PDF-Yemen), an independent thinktank, for "the last 20 or 30 years, all Islamist people who have problems come here... it's a haven for them."

As recently as last September 17, an attack claimed by Al-Qaeda targeted the American embassy in Sanaa, leaving 19 dead, including seven attackers, in the second strike on the high-security compound in six months.

Oil installations have also been frequent targets in Yemen, which had a modest production of 300,000 barrels a day in 2008.

"Yemen is not a failed state, but it is on the brink of becoming so," said one diplomat on condition of anonymity. "It could go over very rapidly because of mounting problems."

In addition to the jihadist threat, there is also a latent Zaidi sect revolt in the Shiite-majority mountainous north sandwiched between Sunni Saudi Arabia and Sunni southern Yemen, where secessionism also still ferments.

Following unification in 1990, the peace lasted just four years before north and south fought a brief but bloody civil war in which southern separatists were finally crushed.

Simmering security issues aside, some experts believe Yemen's main problems are a lack of water resources and a rapidly increasing population in which two-thirds of the people are aged below 24.

The worst problem is the water

"The worst problem is the water," said Hassan. "Twenty years from now, there will be no water in the whole district of Sanaa," a mountainous region that is now home to two million people.

"There should be six millions in 20 years in the whole Sanaa region. These people will have no jobs, no water. And they are tribal people. They only have machine guns. What will they do? They will go south," he added, sketching a frightening scenario.

Most Yemenis seem to agree, but few believe it will happen, given the huge difference in wealth -- Yemen's one to Saudi Arabia's 20 -- and because conservative Gulf monarchies may not look too kindly on a new member where politics means regular elections.

On February 26, parliament in Sanaa overwhelmingly approved a two-year delay in legislative elections scheduled for April to pave the way for political reforms and avert a threatened crisis.

The move followed an agreement between President Ali Abdullah Saleh's ruling General People's Congress and the opposition, which had threatened to boycott elections for the 301-member house, where it has 63 seats and the GPC 235.

Saleh, who won a new seven-year term in a 2006 presidential election, first took office as leader of what was then North Yemen in 1978.

"We need more Official Development Assistance," he said, adding that the country now receives only the equivalent of 13 dollars per capita when it is "worse than Africa" in terms of infant mortality and child mortality.

Increased public aid during a global recession is an unlikely prospect, however.

At the end of 2006, a donor countries' conference in London secured pledges of 5.7 billion dollars for Yemen. But more than two years later, just "20 percent of those promises have been met," one expert told.

So will Yemen sink or swim? The international community does not want another war-torn Somalia, which has been engulfed in civil war since 1991 and where no central government is strong enough to impose its authority.

"The only solution that will save Yemen is for the whole world to focus on it, and instead of waiting for it to descend into chaos like Somalia, to prevent it from doing so," a diplomat said.

"I don't see how we can let this country be set adrift."

However some see Yemen's tribal system -- one of the main threats to state authority -- as also being an instrument of its salvation.

"It's a fragile state," said another diplomat, but "Yemen is not Somalia" because "the tribes are there".

This news is a total 1112 time has been read