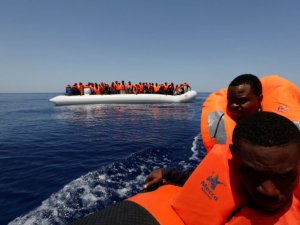 Migrants react after being rescued by the Malta-based NGO Migrant Offshore Aid Station (MOAS) ship Phoenix during a rescue operation in the central Mediterranean, in international waters off the Libyan coastal town of Sabratha, May 4, 2017.

An Italian parliamentary commission said on Tuesday more controls needed to be imposed on humanitarian organizations that are taking an increasingly significant role in rescuing migrants from the Mediterranean.

In a series of non-binding recommendations, the commission also said that Malta and Tunisia should do more to help Italy tackle the huge numbers of migrants who are using Libya as a springboard in search of a better life in Europe.

The Senate Defence Committee launched the inquiry earlier this year amid accusations that non-governmental organizations (NGOs) were colluding with people smugglers to help with search and rescue operations close to the Libyan coast.

In their conclusions, parliamentarians said no NGO groups were under investigation, but they called for them to be put under greater scrutiny, saying their ship crews and financial backers should be registered with authorities.

They also suggested that police should travel aboard NGO vessels — something most humanitarian groups have rejected.

“In no way, either under international or local law, is it desirable for private organizations to create humanitarian corridors,” the parliamentary report said, stressing that only state bodies should oversee the migrant crisis.

Aid groups such as Doctors without Borders deny helping the smugglers, saying their sole aim is to save the lives of migrants who are invariably crammed onto dangerous, unstable rubber dinghies or wooden fishing boats and pushed out to sea.

Italy has been a destination for seaborne migration for years, with more than half a million people arriving here since 2014. A record 181,000 made the trip in 2016 and arrivals so far this year are up some 30 percent.

The commission said in 2014, less than one percent of all newcomers were plucked from the sea by NGO boats. In the first four months of this year, that figure had jumped to 35 percent.

Almost all the migrants are brought to Italy and the commission said neither Malta nor Tunisia, which were often the closest countries to the crowded boats, took in the refugees.

“We need to end a situation that is clearly no longer sustainable, and strike an accord as soon as possible,” the commission said, referring to both Malta and Tunisia.

The commission chairman, Nicola Latorre, said migrants were given satellite phones with the numbers of NGOs to call once they were at sea to try to secure their rescue.

“It has emerged that the phones are thrown into the sea if the rescues are carried out by naval vessels. But if an NGO carries out the rescue, the phones are taken back and used in subsequent crossings,” Latorre said.

This news is a total 667 time has been read
Tags: Italian Commission Says More Controls Needed on NGO Rescue Boats in Mediterranean