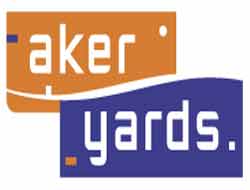 In October, South Korea's STX Shipbuilding 067250.KR bought 39 percent of the shares in Aker Yards in a surprise thrust into the cruise sector where the Norwegian group is a major player through its Finnish yards and where Fincantier is its rival.

"The big fear is that European hegemony in the building of cruise ships and military vessels will vanish from the continent if Korean STX succeeds in taking over Aker Yards," Finansavisen said on Friday.

The paper noted that Italian politicians were working on a bourse listing of state-owned Fincantieri and added: "Central politicians believe that a merger with Aker Yards will yield a bourse listing at the same time as Italy will retain a majority in a merged company," Finansavisen said.

"In this way STX can be prevented from taking full control of the company," it said. The paper said French politicians are also concerned about keeping European shipbuilding in European hands. In 2006 Aker Yards bought French industrial group Alstom's (ALSO.PA: Quote, Profile, Research) shipyards in Saint-Nazaire and Lorient. Officials at Aker Yards could not be reached immediately for comment.

Aker Yards has struggled with persistently weak results because of high activity that has caused costs to rise in its ferry operations in Finland. In mid-December it cut its 2007-2008 earnings guidance due to delays in the loss-making ferry business and said it would consider hiving off its profitable offshore and specialised vessels division to give value to shareholders.