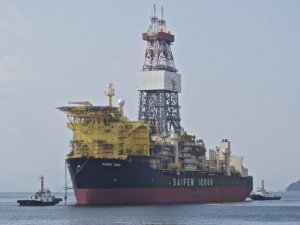 Saipem SpA is considering a combination with rival Subsea 7 SA in what could rank as one of the European oil services industry’s biggest-ever deals, people with knowledge of the matter said.

The Italian company is pursuing a potential transaction with Norway-listed Subsea 7 as it seeks to bulk up and weather an industry downturn, according to the people, who asked not to be identified because the information is private.

Subsea 7, which has a market value of about $3.3 billion, rose as much as 8.4% in Oslo trading Friday for the biggest advance in more than two years. Saipem jumped as much as 5.3%. Both companies later pared their gains..

The price of Brent crude has fallen about 28% from its October 2018 peak, which has driven companies in the sector to try and bulk up to cut costs, diversify and become more competitive. Oil services providers, which supply energy explorers and producers with equipment and expertise, have been hit hard by the drop in crude prices, as their clients have cut spending on everything from drilling rigs to support platforms.

The recovery for the service companies from the depths of crude’s crash that started in 2014 has been slower than anticipated. Offshore rig company Northern Drilling Ltd. canceled a deal to buy a new drillship in October while Prosafe SE, which provides accommodation vessels, has struggled. TechnipFMC Plc, formed by the combination of two service providers during the downturn, last month signaled challenges for some of its units.

Subsea 7, led by Chairman Kristian Siem, made a failed attempt last year to take over McDermott International Inc. for $2 billion. Since then Subsea 7 has made some smaller acquisitions in its effort to expand through dealmaking, buying technology provider 4Subsea in October for an undisclosed sum.

Saipem isn’t the only company from the Italian energy industry seeking growth abroad. This year, Eni and OMV AG acquired a $5.8 billion stake in Abu Dhabi National Oil Co.’s refining unit. Since 2000, Eni has racked up 10 acquisitions each worth at least $1 billion.

This news is a total 921 time has been read
Tags: mergers and acquisitions, saipem, subsea 7