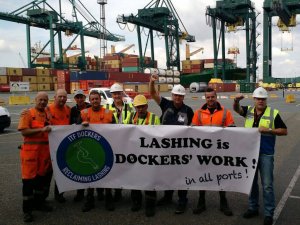 Coming from ITF unions in Germany, Finland, Norway, Sweden, Belgium, the Netherlands, Poland and Denmark, the workers will continue the next stage of the ITF/ETF European Lashing Campaign, which is spearheaded by Danish union 3F.

“ITF inspectors have identified that Unifeeder-chartered vessels are regularly failing to hiring lashing gangs in European ports and seafarers are tasked with dockers’ work. Despite notices being issued to the masters of vessels to put an end to this practice, the ITF and ETF believe that not enough changes have been made,” ITF dockers said.

Although the unions tried to have a dialogue with Unifeeder about cargo lashing, the company did not change its position on the issue, according to Torben Seebold, ITF dockers’ section vice-chair.

“We feel that we have little alternative but to show them how passionately our members feel about ensuring that Lashing is dock-work. We are sending out messages to all shipping lines and charterers who resist and abuse ITF agreements, that they will find themselves under increasing pressure to adhere to the agreements they sign. We are determined to win back our work and we won’t go away,” Seebold added.

This news is a total 2920 time has been read
Tags: ITF, ETF Dockers to Stage Unifeeder Demonstration