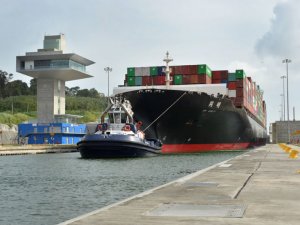 In their statement, the ITF said it was made aware of a communication sent on 30 May 2018 by the Panama Canal Authority (ACP) to the Union de Capitanes y Oficiales de Cubierta (UCOC), the union representing Panama Canal tugboat captains, about reducing the tug’s complement to the minimum manning established by the Panama Maritime Authority, i.e. one captain, two deckhands and one engineer.

Since the opening of the Neopanamx locks in 2016, it has been standard practice for the ACP to supply an extra captain and (third) deckhand to join the tugboats specifically during transits of new locks.

According to the ITF statement, however, the ACP informed the UCOC that starting on 1 July 2018, the additional captain will no longer be supplied.

The move marks the latest escalation in a dispute between the UCOC and Panama Canal management over minimum safe manning of tugobats. In April, the ACP unexpectedly reduced the number of deckhands available to Panama Canal tugboats, deciding that they would no longer supply the third deckhand during lock transits, as has been the case since the new locks opened.

The reduced manning prompted a brief work stoppage on 12 April 2018. The stoppage interrupted a small number of vessel transits in the Expanded Panama Canal, leading to the ACP to sanction tugboat captains involved and publicly accused them of breaking the law.

The tugboat captains argue that the reduction in crew complement jeopardizes the safety of workers and vessels in the new Neopanamax locks.

“The ACP has claimed that the move, together with other unspecified changes, will provide the captains with an improved working schedule and potentially reduce the demand to perform overtime,” the ITF said in its statement on the elimination of the second captain position.

“The ITF has documented that overtime regularly exceeds normal working hours, with some captains forced to work more than 16 hours a day,” it added.

The ITF also criticized the ACP for making manning decisions unilaterally without the consultation with the unions.

“While the ACP acknowledges that the concerns highlighted by the UCOC, the ITF and its unions about extreme working conditions in the new locks are real, the ACP has failed to engage with the professionals represented by the UCOC. The ACP has not opened a dialogue, which would allow the UCOC’s members to provide their expert advice on how to improve the transit operations, including respect of workers’ rights,” the ITF said.

We reached out to the ACP for comment but so far have not heard back.

Since the opening of the Expanded Panama Canal in June 2016, more than 3,000 vessels have transited the new Neopanamax locks. The increased capacity helped the Panama Canal to set a new all-time monthly tonnage record in May, breaking the record for the third time in just two years.

This news is a total 798 time has been read
Tags: ITF: Panama Canal Management to Further Reduce Crew Size on Panama Canal Tugs