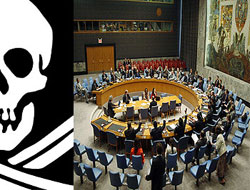 Responding to the UN Security Council's agreement on a new resolution on piracy in the Gulf of Aden, ITF General Secretary David Cockroft said: "We're delighted the Security Council has responded to our, the shipping industry and the IMO's direct appeal''

Responding to the UN Security Council's agreement today on a new resolution on piracy in the Gulf of Aden, ITF General Secretary David Cockroft said: "We're delighted the Security Council has responded to our, the shipping industry and the IMO's direct appeal for this action''.

It is further support for those naval forces seeking to close with the pirates who have turned the Gulf into a war zone ? and a reminder to those navies who haven't done so that it is now time to act.

Following an ad hoc meeting of the IBF Warlike Operations Areas Committee in Singapore on Tuesday 7 October, the International Bargaining Forum agreed to establish a ?high risk area? covering the major part of the Gulf of Aden with immediate effect.

The Memorandum of Agreement agreed at the meeting will provide that seafarers on ships covered by IBF Agreements will receive a bonus equal to 100% of their basic wage while the vessel is in transit. The normal rates of death and disability compensation for seafarers will be doubled during this period.

The growing effectiveness of the channel through the Gulf provided by the designated, IMO-approved, Maritime Security Patrol Area was recognised by the Committee and the intervention of armed naval forces in the region was welcomed.

The Committee therefore agreed that seafarers on ships that used this corridor for the transit should continue to be expected to serve on their vessels during transits. However, seafarers that served on ships that chose not to use the Maritime Security Patrol Area should have the right to refuse to make the transit and to be repatriated at owners expense.
A copy of the Memorandum of Agreement adopted by the IBF Committee is attached and it sets out the co-ordinates of the IBF High Risk Area.

Speaking after the meeting Brian Orrell, the ITF spokesman said:

?We have been very seriously concerned about the reports from the Gulf ? the pirate attacks seem to be escalating and covering a wider area of the Gulf. This agreement is breaking new ground in recognising that seafarers face serious risks at sea besides just the possibility of being asked to sail into an area where wars are in progress. This is a major step forward for the IBF.?

Captain Manji, the spokesman for the employers group said:

?We are pleased that the efforts being made to improve security in the Gulf by providing patrols by armed naval vessels seem to be helping the situation and we urge those responsible to increase the number of ships in the area and to strengthen the rules of engagement. We appreciate that the IBF has not designated a ?high risk area? before, but the special factors in this situation justify this measure.?

This news is a total 2968 time has been read