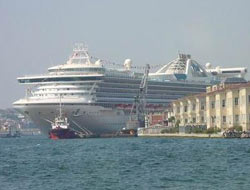 İzmir Alsancak Port, which was visited by 150 thousand people last year, this year increased this count to 115 thousand in 6 months.

İzmir Alsancak Port, which was visited by 150 thousand people last year, this year increased this count to 115 thousand in 6 months.

Dologh said they had worked with Italy and Turkey to put İzmir in the list of the ports which cruiser ships rests and had increased the customs to 2 dollars, as a result of these cruiser tourism had rised there.

Dologh who said: " Turkey attacked after the discovery of cruiser tourism." continued saying: " Turkey is an important zone for cruiser tourism, it takes place at Mediterranean Catchments. Apart from this it is a star, which will shine with its values of history, culture and climate. I believe that İzmir, which managed to be in the list of MSC which is the most brilliant company in the sector after Costa, will make important enterprises at cruiser tourism."

Baltazzi: "Our Aim is to Reach 400 Thousand People"

Baltazzi who mentioned that their aim is bringing 400 thousand foreign tourist to İzmir, continued: " Paying customs by İZTO, coordinate the port, our tries are the reasons of foreign tourists to come İzmir Port. This year we know that 300 thousand passengers will come. Our aim is to reach 400 thousand. We have been still about to deal with some companies about this. in 2008 the count of passengers come by cruiser vessels is expected to increase percent 20."

On the other hand, Baltazzi who defends it was wrong that the tourists come by cruiser ships didn't leave foreign currency, said they followed tourists' spendings and they would conduct a survey to tourists to gain statistical data