Jacksonville Votes to Fund Next Phase of Port Dredging Project 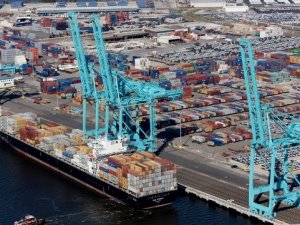 In a vote of confidence in the future of JAXPORT, the Jacksonville City Council has committed an additional $110 million to the ongoing St. Johns River dredging which is critical to the continuing expansion of the port.

The five-year project is designed to make the port accessible to the large post-Panamax container ships sailing from Asia through the new large locks at the Panama Canal.

The City Council cast 17 unanimous votes according to the Jacksonville Daily Record to authorize the city contribution to the project as well as a loan to the Jacksonville Port Authority. This is part of the final contract to complete the dredging project. The project entails dredging the shipping channel from its current depth of 40 feet to a total of 47 feet for its 13-mile length from the Atlantic Ocean to the Dames Point terminal.

The city’s contribution to the financing is in addition to $56 million from the federal budget earmarked for the project. In total, the port says nearly approximately 80 percent of the cost of the total project, nearly $400 million, has been raised from the federal and state government along with the port and local business. The port has, according to the newspaper, until August 20 to secure and submit the funding to the U.S. Army Corps of Engineer.

Speaking in February 2020, Jacksonville Port Authority Chief Executive Officer Eric Green and Chief Financial Officer Beth McCague said that the project was reaching its halfway point with a 5.5-mile stretch expected to be completed in the spring. The harbor deepening project they said was on track to be completed by 2023, two years ahead of the original schedule.

Already Florida’s largest container port complex JAXPORT set new container, vehicle, and general cargo volume records in fiscal year 2019. In November 2019, they also broke ground on an expansion of the Jacksonville Container Terminal that includes $238.7 million in infrastructure and equipment upgrades. Improvements to the yard area will allow the facility to accommodate up to 700,000 TEUs annually. Berth upgrades are expected to be complete in 2021 and will allow the terminal to simultaneously work two post-Panamax vessels, while a new turning basin is included in the dredging. The plan calls for completion of the expansion efforts to coincide with the 2023 completion of the dredging project.

This news is a total 829 time has been read
Tags: Jacksonville , Votes to Fund , Next Phase , of Port Dredging, Project, City Council cast , Turkish maritime news Fincantieri has Positive Outlook After First Half Impacted by COVID-19As of the mid-year, Fincantieri has a total backlog for 117 ships, of which 28 billion euros is committed orders and nearly another 10 billion is a soft backlog with production work currently scheduled to 2027. Jacksonville Votes to Fund Next Phase of Port Dredging ProjectIn a vote of confidence in the future of JAXPORT, the Jacksonville City Council has committed an additional $110 million to the ongoing St. Johns River dredging which is critical to the continuing expansion of the port.