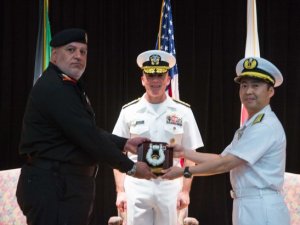 For the fourth time since 2013, Japan has taken command of Combined Task Force (CTF) 151 at a short ceremony at Combined Maritime Forces (CMF) headquarters in Bahrain, relieving the Kuwait Navy of their duties.

Since taking command from the Republic of Korea Navy in October last year, Captain Khaled Alkandari and his team have led CTF 151 through a number of key leader engagement events, focused operations and counter-piracy activities.

They have enjoyed support to operations from a number of nations’ vessels, most notably from Japan, the Republic of Korea and the Netherlands.

During the Change of Command ceremony at CMF headquarters in Bahrain, command of the task force was handed from Captain Alkandari to Rear Admiral Ishimaki of Japan.

Rear Admiral Ishimaki will lead a staff consisting of members of the Japanese Navy but also staff from Australia, Brazil, Republic of Korea, Thailand, the UK and the USA and will additionally have the support of a liaison officer from Oman.

On taking command, Rear Admiral Ishimaki said: “My team and I will do our utmost to deter and suppress pirate activity while reassuring legitimate users of the high seas.”

CMF is a 33-nation naval partnership that works collaboratively with partners and organizations to ensure maritime security and stability in the Middle East region. CTF 151 is CMF’s task force focusing on countering piracy in the Gulf of Aden and off the Horn of Africa.

This news is a total 1407 time has been read
Tags: combined maritime forces, CTF-151.