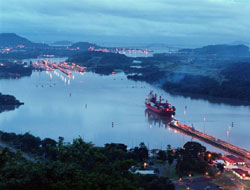 Japanese financial institutions have agreed in principle with the Panama Canal Authority to provide 800 million dollars for a project to widen the canal to alleviate congestion in it.

By the project, the shipping volume will double in the canal

Japanese financial institutions have agreed in principle with the Panama Canal Authority to provide 800 million dollars for a project to widen the canal to alleviate congestion in it, it was learned Saturday.

The Panama Canal is a major artery connecting the Atlantic Ocean to the Pacific Ocean. However, the canal is chronically congested, causing a wait time of several days for ocean vessels wanting to enter it.

To help solve the problem, excavation of trenches along both sides of the 80-kilometer-long canal began in 2007, to be completed in 2014, the 100th anniversary of the opening of the canal.

The Panama Canal Authority plans to procure 2.3 billion dollars of the total project cost of 5.25 billion dollars from overseas, from such sources as Japanese financial institutions and the Inter-American Development Bank.

The Japanese financial institutions determined they would be able to recoup their loans as the Panama Canal Authority has begun raising the canal's tolls, according to the JBIC's Americas Finance Department. Japan is the third most frequent user of the canal, following the United States and China.

A consortium of Taisei Corp. and Mitsubishi Corp., both Japanese companies, and U.S.-based Bechtel Corp. has announced its plan to undertake the widening project.

With its completion, the shipping volume will double in the canal, and more types of vessels will be able to use it, including mid-size oil tankers and liquefied natural gas carriers in addition to the current container vessels.

The project is also expected to drastically reduce the time it takes to transport oil from Latin American countries, which is usually transported via the Cape of Good Hope off South Africa.

This news is a total 1097 time has been read