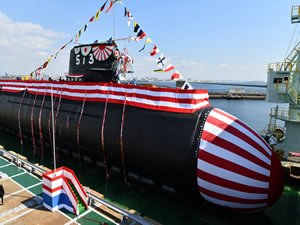 Taigei, a first unit in the Japan Maritime Self Defense Force’s (JMSDF) new class of attack submarines, has been launched and named in Japan.

Scheduled to be commissioned in March 2022, Taigei will be reportedly followed by at least two sister units. As explained, the literal meaning of Taigei is “big whale”.

The 3000-ton submarine features a length of 84 meters and a width of 9.1 meters and can accommodate about 70 people. It has a diesel-electric propulsion.

The Taigei submarine is equipped with a sonar system with improved detection capability. What is more, it has an advanced, stealth-like design and a lithium battery system that ensure quiet operation and longer endurance.

The Taigei-class is the successor of the JMSDF’s Soryu-class diesel-electric submarine. Almost a year ago, Kawasaki Heavy Industries, another Japanese shipbuilder, launched the 12th Soryu-class unit, Toryu (SS-512). Toryu is planned to be handed over to the navy in 2021.