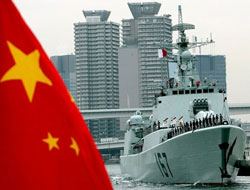 The destroyers Haikou and Wuhan, two of China's navy's most sophisticated warships, set sail from the southern resort island of Hainan along with a supply vessel, the official Xinhua news agency said. The three ships have about 800 crew, including 70 special operations troops, Xinhua said. "We have made special preparations to deal with pirates, even though these waters are not familiar to us," it quoted mission commander Rear-Admiral Du Jingcheng as saying. The crack forces are expected to give the fleet an edge in seeing off the pirates, with one of the soldiers able to "handle several enemies with (his) bare hands," Xinhua said.

?Our primary target is not striking them but dispelling them,? Du said. ?If the pirates make direct threats against the warships or the vessels we escort, the fleet will take counter measures.?

A surge in attacks at sea this year in the busy Gulf of Aden and Indian Ocean off Somalia has pushed up insurance costs, brought the Somali gangs tens of millions of dollars in ransom and prompted foreign warships to the area.

Now Japan is considering sending its ships too, which could prove a legal and diplomatic headache for Tokyo, whose military activities overseas are tightly restricted by its post-World War II pacifist constitution. Japanese Prime Minister Taro Aso ordered Defense Minister Yasukazu Hamada to press ahead with talks on how the armed forces could act against the pirates, the government"s top spokesman told reporters. ?He ordered the defense minister to speed up considerations so that we can act quickly,? Chief Cabinet Secretary Takeo Kawamura told reporters.

The naval dispatch would be the first by Japan to the region. Japan"s military has not engaged in combat since World War II though Japanese forces have been in Iraq to help in the country"s reconstruction. Any Japanese mission also raises the possibility that Japan may end up working with China to deal with the pirates, a country where memories of the Japanese army"s brutal 1931-1945 invasion and partial occupation still run deep.

While China"s growing wealth and influence have seen it involved in a number of peacekeeping operations around the world, it has traditionally kept troops close to home, reflecting a doctrine of non-interference in other nations" affairs.

But the Somalia mission is an opportunity for China to take a greater role in global security without raising hackles from neighbors, many of whom, including Japan, have long-festering territorial disputes with Beijing.

?The general sense is China is now a regional power, and in the economic domain has become a major player with rising economic strength,? said Wu Ray-kuo, managing director of political risk at Taipei"s Fu-Jen University.

?There is also responsibility that comes with it, responsibility not only in the area of financial matters but also in other areas like politics and security.? Still, the presence of Chinese warships in foreign waters is sure to fan unease in some quarters overseas. Beijing"s opaque but quickening military build-up has contributed to a sense of unease in parts of Asia, especially Taiwan, the self-ruled island China claims as its own and has vowed to bring under mainland control, by force if necessary.

This news is a total 1025 time has been read