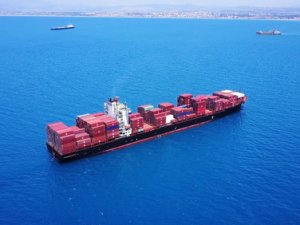 It is estimated that container trade between Japan and South Korea shrank from a year earlier in 2019, suffering the first year-on-year contraction in four years, or since 2015.

Major contributing factors are believed to have been deteriorations in the Tokyo-Seoul relations and delays in shipping schedule due to the six typhoons that hit the waters between the nations.

The accumulated volume of containerized shipments moved on the Japan-South Korea route decreased 4% (or by some 70,000 TEUs) to 1,755,934 TEUs in the 11 months from January to November 2019, according to figures compiled by the Korea Nearsea Freight Conference (KNFC). As for local cargo, 344,659 TEUs were exported from South Korea to Japan, down 4.3%. Meanwhile, imports from Japan to South Korea declined 5.8% to 296,814 TEUs. The combined volume of transshipment (T/S) and feeder containers also waned, going down 3.4% to 1,114,461 TEUs in total.

Containers on the trade, however, improved 8.4% and 7.3% year on year in October and November, respectively, but are estimated to have fallen in December and January.

Japan tightened its restrictions on exports of high-tech materials to South Korea in July 2019. Reacting against it, South Korea boycotted Japanese products, leading to the expected contraction of the container trade between the economies. The total value of exports from Japan to South Korea plunged 12.9% to US$ 29,594,892 in 2019, according to trade statistics unveiled by the Ministry of Finance (MOF) of Japan on 23 January.

This news is a total 673 time has been read
Tags: CONTAINER TRADE, JAPAN , SOUTH KOREA Worst Case Scenario Could Bring About USD 23 Bn Loss for CarriersBlanking of sailings triggered by the demand drop from the coronavirus pandemic could result in a USD 23 billion collective loss for container carriers in the worst-case scenario, Copenhagen-based consultancy Sea-Intelligence predicts. World’s Largest Containership to Start Sailing at the End of AprilThe delivery of 24,000 TEU containerships to South Korean shipping company HMM will not be delayed by the ongoing impact of the coronavirus pandemic on the shipbuilding industry. Wharfies Refuse to Unload Boxship in Melbourne amid COVID-19 ConcernsWharfies at the DP World terminal in Melbourne, Australia refused to unload a container vessel last night citing safety risks to workers and the community. Coronavirus Pandemic Sets Off a New Wave of Blank SailingsJust as the number of blank sailings out of China by container carriers started to subside, the industry is bracing for another surge on the Asia-Europe trade as the coronavirus pandemic spreads to Europe.