Japan submarine collides with private ship, no damage to the ship 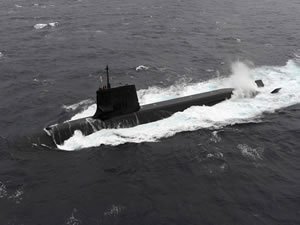 There was no damage to the private ship, Kato quoted the Japan Coast Guard as saying. It was not immediately clear if there had been any damage to the submarine.

A Japanese submarine and a private ship were involved in a crash off the Pacific coast on Monday and three of the submarine's crew suffered minor injuries and it was slightly damaged but still able to sail, government officials said.

The submarine, operated by the Maritime Self-Defence Force, as Japan's navy is known, and the ship crashed off Kochi prefecture in southern Japan, chief cabinet Secretary Katsunobu Kato told a regular news conference.

Kato, quoting the Coast Guard, said that there was no damage to the private ship.

Authorities were looking into details, such as the type of the ship and in which country it was registered, Kato said.

The Maritime Self-Defence Force said three crew members on the submarine suffered minor injuries and the vessel's mast was damaged but not enough to hinder its ability to sail.