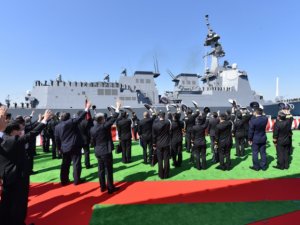 The 172-meter-long Maya (DDG-179) was handed over to JMSDF by shipbuilder Japan Marine United Corporation (JMUC) at Yokohama Shipyard Isogo Works on March 19.

The Aegis-equipped ship – named after a mountain in Kobe and a WWII heavy cruiser — was launched back in July 2018.

The second destroyer, JS Haguro, was launched in July 2019 and is planned to be delivered in 2021.

The Maya-class displace 8,200 tons and carry SM-3 Block IIA and SM-6 interceptors for the ballistic missile defense role, in addition to SM-2 and the Evolved Sea Sparrow Missile (ESSM).

The ships’ main gun is an Mk-45 Mod 4 naval gun in a stealth-shaped casing. With the new class of ships, Japan is also set to join Australia and the US in fielding the CEC  – a sensor data sharing tool currently found only on US and Australian Navy ships.