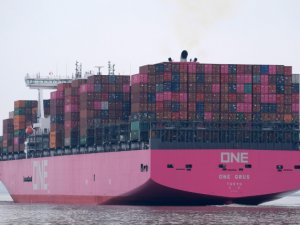 As explained, the companies’ performance improved as their container shipping joint venture Ocean Network Express (ONE) returned to profitability from a significant loss suffered last year.

This was a result of service stabilization, recovery of liftings and space utilization as well as lower operational costs.

A significant boost in the containership segment helped MOL post a much higher net income. In the two quarters ended September 30, 2019, the company’s net income rose to JPY 25.6 billion (about USD 237 million), from JPY 5.7 billion seen in the corresponding period a year earlier.

MOL’s revenue decreased to JPY 574.3 billion in the first two quarters of FY2019 from JPY 619.8 billion posted in H1 FY2018. This was due to negation of MOL’s non-consolidated revenue for the containerships, which was included in the results for the same period of the previous year, the company said.

Driven by major improvements in liner business, NYK returned to black by reporting a net income of JPY 11.1 billion in H1 FY2019, compared to a net loss of JPY 9.7 billion recorded in the same period last year.

NYK’s revenue dropped to JPY 824.7 billion in the first half of this fiscal year from JPY 915.6 billion seen in the first two quarters of FY2018. According to NYK, the decrease was due to the sales of subsidiary shares as part of a business portfolio revision.

The bottom line of the third carrier, K Line, was also stronger, reflecting improved profitability of ONE. The company ended the first half of the current fiscal year with a net income of JPY 16.3 billion, against a net loss of JPY 24.6 billion suffered in the same period last year.

On the other hand, K Line’s operating revenues decreased to JPY 372.4 billion in H1 FY2019 from JPY 416.1 billion reported in the corresponding six-month period of FY2018.