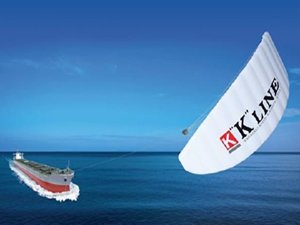 Granted under ClassNK’s Wind Assisted Propulsion Systems guidelines, the system, which is known as Seawing, is a concept design that converts wind energy into propulsive force.

K Line had announced in June 2019 that it was working with Airseas to develop the concept for a test installation on one of the line’s large bulk carriers. The companies reported that had been working on the concept for two years and that initial assessments confirmed that the kite system could contribute to the reduction of the environmental load associated with the ship's operation. They reported that the installation on a bulk carrier could reduce emissions by more than 20 percent, equating to approximately 5,200 tons of CO2 annually.

Developed by Airseas, which was a spin-off from Airbus, the major aircraft manufacturer, Seawing is a kite system mounted on the bow of the vessel. By harnessing natural wind power through its dynamic flight they hope to assists the vessel’s propulsion power. It is controlled from the bridge and a simple switch launches or recovers the kite which unfolds, operates, and refolds autonomously. The Seawing system collects and analyses meteorological and oceanic data in real-time, and then adapts its flight to this information to optimize its performance as well as to ensure maximum safety.

Obtaining the AIP the companies said marks the completion of the initial design related to the kite structure and controls. They will now proceed with further development of the technology including detailed engineering for the system. They continue to target the installation and operation of the system on a K Line vessel.

This news is a total 2454 time has been read
Tags: Japanese Class Society Approves Concept Wind Kite to Aid Propulsion