Japan's coal import in this year 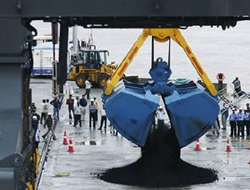 Japan is burning so much coal as it tries to lower the cost of replacing nuclear energy that it may see a surprise dip in imports of liquefied natural gas (LNG) in 2013, the first in four years.

Many analysts are still forecasting a rise given that Japan's last two nuclear power plants went offline in September, finishing a complete shutdown of the industry started by the March 2011 Fukushima disaster.

But under pressure from Prime Minister Shinzo Abe's administration to improve industry competitiveness, Japan has thrown out greenhouse emissions limits and its utilities are burning record amounts of thermal coal.

Japan's 10 main utilities, making up half of the nation's coal use, consumed nearly 16 percent more coal in the first 10 months compared with a year ago and imported nearly 11 percent more. Consumption rose 26 percent in October alone.

Two new coal-fired power stations with combined capacity of 1,600 megawatts due to start commercial operations next month will add another 3.7 million tonnes a year to demand.
Further increases should help support global coal prices , which are down nearly 9 percent in 2013 as demand growth weakens in top consumer China.

And weaker LNG demand from Japan, which takes in about a third of world shipments, will help keep global prices capped despite robust demand from South Korea and China. The jump in Japanese imports by nearly a quarter in the two years since March 2011 had been a prime driver in the doubling of Asian spot benchmark prices to $19/mmbtu since then.

"It's a counterbalance," said Gavin Thompson, Wood Mackenzie's head analyst for Asia-Pacific gas and power. "The fact that we are seeing significantly stronger winter spot demand in China and strong demand in South Korea - both of those buyers are fairly welcoming of the fact that Japanese demand is relatively flat."

Imports of the superchilled fuel by local electricity monopolies fell 1 percent in January-October while consumption dropped by 1.8 percent. The monopolies account for two-thirds of Japan's LNG usage.

The shift to coal is prompting a gas analyst at a government affiliated energy research institute to consider revising his forecast for record LNG use in the year through March 2014.
"Perhaps there might be a slight downward revision, although to be honest, I feel a bit reluctant to downgrade at a time when all the nuclear plants are shut," said Akira Yanagisawa, a manager in the energy analysis group at the Institute of Energy Economics, Japan (IEEJ).
In August, Yanagisawa forecast LNG imports would rise 1.7 percent to a record 88.3 million tonnes in the financial year through March and another 1.5 percent to 89.7 million tonnes in the year through March 2015.

Any decline from last year's record LNG imports of 87.3 million tonnes may be short-lived. Japanese utilities will start operating 14 new gas-fired plants between April next year and July 2015, which at full operation would consume about 5.8 million tonnes of LNG a year.

With high energy imports contributing to Japan's persistent trade gap, including 1.09 trillion yen ($10.72 billion) last month, the cost benefits of coal over LNG are compelling.
The value of LNG imports rose 14.3 percent to 5.79 trillion yen between January and October, compared with a fall of 0.7 percent to 961.4 billion yen for coal.

Japanese utilities are pushing hard to cut coal prices further and diversify their sources away from Australia and Indonesia, which together supplied almost 90 percent of Japan's coal this year.

"Our policy is to recommend that companies not only rely on Australia and Indonesia, but that they diversify by taking stakes and royalties in coal development in other areas as much as possible," said Hiroyasu Morita, a deputy director in the coal division of the Agency for Natural Resources and Energy in Japan's industry ministry.

The main threat to Japan's LNG demand is still a revival of the nuclear industry, but it's not clear when or even if this will happen.

Prior to Fukushima, nuclear power accounted for about 30 percent of electricity and the government had planned to increase that ratio to 50 percent to keep a lid on emissions targets. Japan may have only four nuclear reactors back operating by March 2015, according to the IEEJ.
Source: Reuters (Additional reporting by Rebekah Kebede in PERTH, Florence Tan and Jane Xie in SINGAPORE and James Topham in TOKYO

This news is a total 1660 time has been read