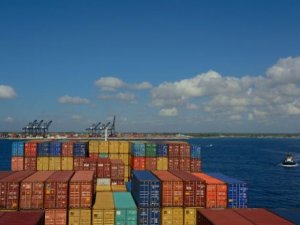 Nittsu Research Institute and Consulting, Inc. (NRIC) on Dec. 24 unveiled its economic and cargo transport projections for fiscal years 2019 and 2020.

The think tank foresees that exports of containerized shipments from Japan to Southeast Asia will both stop decreasing, assuming the trade friction between the U.S. and China and the slowdown in the Chinese economy will both ease. Exports of construction and industrial machinery will pick both up, too, thanks to a recovery in demand for capital investment in overseas countries and regions. As such, export containers will turn upward, growing 1% from a year earlier to 5.016 million TEUs. In contrast, imports of containerized shipments to Japan will decline 0.4% to 7.458 million TEUs, due to sluggishness in consumption goods, a major import item, suffering a year-on-year contraction for two straight years.

As for airfreight, meanwhile, NRIC anticipates that exports from Japan will increase 0.6% to 1.052 million tons in fiscal 2020, achieving the first year-on-year growth in two years. The research institute envisages that they will move away from a downward trend, while those of semiconductors are anticipated to increase. Air cargo imports will wane 1.4% to 1.179 million tons, incurring a year-on-year decrease for two back-to-back years, owing to a decline in consumer goods.

This news is a total 1297 time has been read
Tags: EXPORTS INC. (NRIC), JAPAN , NITTSU RESEARCH INSTITUTE AND CONSULTING