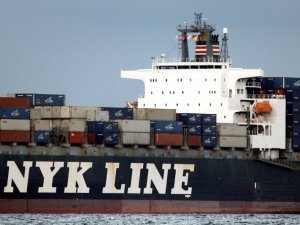 Nippon Yusen, Japan’s biggest shipper by sales, warned it would book a $1.9 billion hit to first-half income, after the industry’s deepening slump forced it to write down the value of container ships and other assets.

The shock writedown is the latest symptom of the dramatic slowdown in the container shipping sector. Weaker global trade, and in particular softer demand from China, has battered freight rates and left hundreds of ships idle.

Nippon Yusen, known as NYK Line, said in a statement it may revise full-year financial forecasts and would reconsider planned dividend payments. It will announce changes on Oct. 31, when it reports first-half earnings in full.

“It’s really a perfect storm – NYK is a very diversified company with about 30 percent of their revenues coming from the containers business and almost 40 percent from bulk transportation,” Ralph Leszczynski, head of research at ship broker Banchero Costa in Singapore.

“In normal circumstances such diversification would be beneficial for them. Unfortunately, this year has seen very challenging market conditions pretty much across all sectors,” he said.

NYK Line, which was founded in 1885 and counts Mitsubishi Heavy Industries as a major shareholder, said it would book an impairment loss of 160 billion yen, as it writes down the value of container ships and dry bulk carriers – two of the sectors that have seen the greatest increase in supply.

It also reduced the value of assets it is buying “to their recoverable amounts”.

Only three months ago, the shipper revised its full-year outlook to a net loss of 15 billion yen from an earlier prediction of a 15 billion yen profit. It would be its first annual loss in five years.

Analysts predicted more pain in the industry would be forthcoming.

“I suspect the carriers are in a weaker position than they are admitting. The big question now is: can independent carriers survive or will there be a push towards partnerships, if not actual mergers?” said Richard Clayton, chief maritime analyst at IHS Maritime and Trade.

The shipping industry has been hobbled by losses and debt, with NYK among the most indebted with a $7.2 billion net debt burden at the end of June.

The shipper said that within its bulk shipping segment, it has been selling off or returning surplus vessels to their owners and had been scrapping ageing vessels, while adding that its subsidiary would take a loss on aircraft sales and lease contracts.

Prior to the warning, shares in the group had closed up 4.6 percent at 206 yen, giving it a market value of $3.4 billion.

This news is a total 7693 time has been read
Tags: Japan’s NYK Line Warns of $1.9 Billion Hit on Shipping Slump