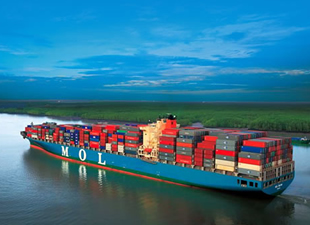 K line increased its full-year forecast by 16.3%, and the shipper now expects to end the fiscal year with USD 212,4 million net income.

All three carriers benefited from lower bunker costs, but also said that congestion at the U.S. West Coast ports is hurting their overall container volumes and raising costs in trans-Pacific container services.

NYK Line posted around USD 269 million net profit for the nine-month period, a 0.3% increase compared to the same period last year. The company says the increase is modest due to factors including provisioning of reserves for antitrust-related losses.

Liner trade revenue increased by 12.4% to YPY 515.4 billion (USD4.38bn), even though additional expenses were caused by unexpected reduced sailings and shortage of tonnage triggered by port congestion in the West Coast of North America.

NYK Line raised its full-year forecast for the fiscal year ending March 31, 2015, saying that it expects to see USD 370 million net profit, with weaker yen and lower bunker prices being the main reasons for the increase.

MOL reported USD 206.9 million net income for the nine months ended December 31, 15.7% percent less than USD 244.8 million earned in 2013. MOL attributed the decline to stagnating economies of both developed and emerging countries, with the exception of the U.S.A.

The company expects to end the fiscal year with USD 323.4 million net profit.

K Line ended the nine month period with USD 273.8 million net income, a 110% increase compared to the same period in 2013. The company attributes the surge in earnings to lower bunker prices, slowsteaming, improved freight rates and the decision to concentrate on more profitable cargo such as reefer cargo.

K line increased its full-year forecast by 16.3%, and the shipper now expects to end the fiscal year with USD 212,4 million net income.