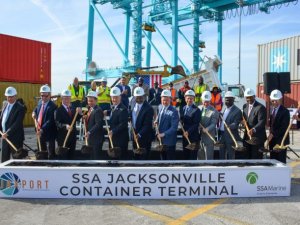 The groundbreaking follows the agreement signed between JAXPORT and SSA Marine in March this year. The agreement for the development and operation of the terminal is for 25 years with two five-year renewal options.

Operations will continue throughout the redevelopment, which is expected to be completed in 2023 — coinciding with the completion of the federal project to deepen the Jacksonville shipping channel to 47 feet.

The SSA Jacksonville Container Terminal offers 80 acres of terminal operating space, with the option to grow up to 120 acres as space becomes available. The facility features three post-Panamax electric container cranes and terminal plans include the addition of three more container cranes.

During the groundbreaking, Admiral Buzby formally presented JAXPORT with a previously awarded USD 20 million grant from the U.S. Department of Transportation. The grant will fund terminal enhancements that will allow the facility to accommodate more containers on an expanded footprint.

This news is a total 288 time has been read
Tags: Container Terminal, Jaxport, SSA Marine.

ROLL GROUP ADDS THIRD BIGROLL TO ITS FLEETThe Netherlands-based transportation company Roll Group has started 2020 with the addition of a module carrier to its fleet. Yang Ming to launch new Southeast Asia servicesAccording to the latest estimates by the International Monetary Fund (IMF), the GDP growth rates in Myanmar and Philippines are expected to exceed 6% for the upcoming two years. ITF Calls for Urgent Action to Fight Piracy in Gulf of GuineaThe International Transport Workers’ Federation (ITF) has called for urgent global and regional cooperation to fight piracy in the Gulf of Guinea region amid the growing number of attacks in the region.