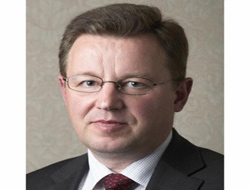 Yrjö Julin (49) has been appointed President & CEO of Aker Yards. He succeeds Karl Erik Kjelstad who has served as Aker Yards CEO since January 2003.

Yrjö Julin (49) has been appointed President & CEO of Aker Yards. He succeeds Karl Erik Kjelstad who has served as Aker Yards CEO since January 2003. Kjelstad will leave Aker Yards to join the executive management team of Aker ASA.

Over the next few weeks, Julin will visit many of Aker Yards locations to meet employees; he will also meet customers, media and other stakeholders.

"Under Karl Erik Kjelstad's dynamic leadership, Aker Yards has become renowned for its bold combination of strategic and operational development. The employees of Aker Yards have taken the company from an annual revenue base of NOK 12 billion to a revenue base of NOK 35 billion. I feel extremely proud and honoured to be asked to lead Aker Yards into the future", says Yrjö Julin.

"In my opinion, Aker Yards' slogan "preferred for innovation" - pinpoints exactly what it takes to succeed in today's marketplace. Our employees are known for their passion for ships and dedication to deliver our newbuilding projects according to our promises. I look forward to developing an even stronger Aker Yards together with the employees" comments Julin.

Talking about the change of CEO, Mr Kjelstad said: "I congratulate Yrjö Julin on his new appointment. Yrjö and I will work together to ensure a smooth transition and make this change a positive step forward for Aker Yards."

"I have enjoyed a fabulous nine years with Aker Yards, and I am extremely proud to have headed a team that has multiplied shareholder value six-fold. Together we have developed Aker Yards to be a global and leading player in its core markets. My Aker Yards colleagues have been a central part of my life, I will truly miss them. I will continue to be a part of Aker Yards as one of many shareholders," said Karl Erik Kjelstad.

Yrjö Julin is President & CEO of Aker Yards as from today. Kjelstad will continue to work for Aker Yards for a period in order to ensure a smooth transition.

Yrjö Julin has been with Aker Yards since 2002, first as President of Aker Finnyards and since 2004 as President of Aker Yards Cruise & Ferries Business Area. Prior to this, Mr. Julin worked in Componenta Corporation for 16 years, the last period as Group Executive Vice President and COO. Before that, he had various positions in the industry since 1982. Mr. Julin holds a Master of Science in technology as well as Licentiate in technology in metallurgy from Helsinki University of Technology. He is a Finnish citizen.