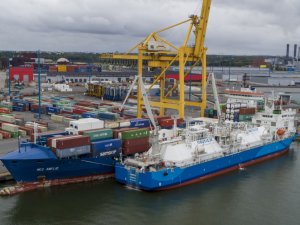 “The first SIMOPS LNG ship-to-ship transfer at a container terminal for the Wes Amelie was a great success, due to the smooth cooperation between the crews on board of the LNG bunker vessel and the receiving vessel, the terminal and port operators, the Nauticor experts and our bunker team here at Unifeeder. This marks another milestone in our quest to develop a comprehensive LNG supply chain, making the use of LNG as fuel for container vessels more efficient,” Hans Staal, Head of Bunker Procurement of Unifeeder, said.

Both vessels already conducted their first LNG ship-to-ship operation at anchorage in front of Visby, Sweden, in April 2019.

By using LNG, a wide range of emissions, especially sulphur, nitrogen and particle matters, as well as carbon dioxide, can be significantly reduced.