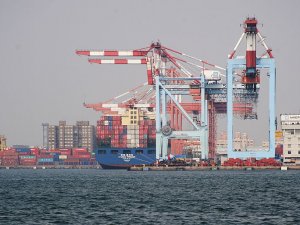 The Kaohsiung Harbor handled 10.27 million 20-foot containers last year, 1.9 percent less than a year earlier amid the establishment of new worldwide shipping alliances and a consolidation in the shipping industry

The Chinese-language Liberty Times (the sister newspaper of the Taipei Times) reported on Saturday.

The nation’s largest port, ranked the 17th-busiest container port in the world in 2016, saw its ranking improve to 13th in the first half of last year, the Liberty Times said.

It did not specify where the port stood in world rankings for the whole of last year, citing a lack of available data.

However, Kaohsiung might have seen its ranking fall two notches in the second half, overtaken by Antwerp, Belgium, and Xiamen, China, the report said.

The port was the world’s No. 3 container port during the 1980s, but lost its position in the top 10 in the late 2000s, due to reduced manufacturing activities in Taiwan and also because neighboring countries, especially China, boosted capacity at their ports or built new ports.

Taiwan International Ports Corp president Kuo Tien-kuei told the Liberty Times that he was not happy with the decline in container volume at the harbor last year.

State-run TIPC is headquartered in Kaohsiung and oversees all of the nation’s international seaports.

However, sea freight traffic in Kaohsiung gradually stabilized in the second half of last year as TIPC sought to collaborate with major shippers to cope with changes in the global shipping industry, Kuo said.

Once that terminal begins operations later this year, it is expected to provide high-efficiency, low-cost loading and unloading operations, TIPC said.

It is expected to attract at least NT$15 billion (US$508.1 million) in operation facilities and equipment investment, the corporation said.

This news is a total 857 time has been read
Tags: Kaohsiung Harbor volume down 1.9 percent last year