Karpowership: we believe that everyone in the world should have electricity 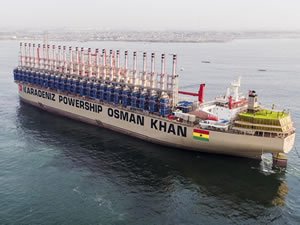 We started Karpowership because we believe in universal access to energy – we believe that everyone in the world should have electricity.

“A family should never have to wonder if they will have enough money for diesel.

The cost of electricity should not be a consideration in a family’s budget – it’s a basic human right.”

Powerships are ship or barge-mounted, fully-integrated floating power plants. With wide ranges of installed capacities for utility size operations and no completion or construction risk, the powerships are ready for generation within a short period of time.

Power is fed directly into the transmission network from an onboard high-voltage substation, and therefore requires no land acquisition.

Floating power has come a long way since – and so too has the ever-increasing need for energy access.

Governments around the world are committing to electrification programmes that enable economic development and improve the lives of their citizens.

One company answering the call for energy supply is Karpowership.

The company provides up to 4300MW of electricity internationally by burning liquid natural gas in on-board power generators.

The ships dock in the harbour, crank up their turbines and start generating electricity for customers on land.

“And of course, the more electricity, the more jobs, education and foreign direct investment opportunities will come, and increase social and economic welfare and gender rights,” says Harezi. “Electricity impacts everything about well-being and happiness. We are passionate about this.”

In order for the powership to function, a floating storage regasification unit (FSRU) is moored and connected to the ship via a floating gas pipeline.

The mooring solution allows for ship to ship transfer through cryogenic hoses at -163 degrees Celcius.

The FSRU gas cargo tanker, with a capacity of up to 150,000m3, receives gas from an LNG carrier.

The gas send-out pressure from the FSRU ship is up to 40barg.

The gas is moved through the regasification system and passed to the powership where it generates electricity. The transformers send the power the ships generate over wires to local transmission grids, and from there it goes out to end users. A variety of powerships meet differing power requirements.

The ships can be installed at a coastal site where there is an available substation for electrical connection and suitable marine conditions for berthing or mooring.

Host locations require minimal onshore infrastructure and are ready to commence once Karpowership receives the go-ahead to deliver the powerships.

The ship is literally turnkey, with construction works including a transmission interconnection point, a small site office and stores adjacent to the powership.

One example of a project location is Indonesia. In 2015 and 2016, Karpowership signed five contracts with the state utility PT PLN (Persero) to deploy five powerships of 1000MW in total for a period of five years. The ships have been in operation since 2016, with one operating on indigenous gas since 2018.

Unfortunately, powerships are not always seen as the holy grail of power solutions. Many argue that use local independent power producers would likely reduce the cost of power generation and would develop the local power market.

Localisation is an important factor when considering any infrastructure development plan. However, the countries that opt for this solution simply do not have the capacity to build and operate this type and scale of technology.

In many instances, Karpowership has worked with the local utilities to help stabilise the grid, for example through helping finance transmission lines. But who carries the additional cost of the power?

This would surely be carried over to the utility customers, ultimately impacting economic development negatively, which runs contrary to Karpowerships goals.

This would only be the case if the ship’s power was more e xpensive, which is seldom the case when comparing the cost of gas and diesel.

Harezi says: “On a 25-year PPA, we are cheaper than any other land-based power plant. It’s cheaper for us to build and operate the ships.

We standardise design, purchase parts in bulk and build several ships at a time.

We build in a controlled environment without unforeseen costs. It’s actually extremely economical.” Another question is whether a long-term PPA is really necessary, when a short-term contract to provide emergency power is all that’s needed.

There is no doubt powerships can play a vital role for countries that are war-torn or going through economic struggles.

The question is, do you rely on outside sources of power, or develop your own to become self-sufficient?

You can’t have both, as at some point supply will outweigh demand and asset will be stranded and will stand idle.

The problem seems to be systemic in nature, occurring within the country itself. The countries being supplied seem to be unable to develop the infrastructure required to supply demand. Therefore, powerships answer the need for delivering power where it’s needed and quickly.

Assessments of cumulative air pollution impacts have raised concerns, and climate and environmental justice groups are concerned that the use of gas locks a country into continued use of fossil fuels and rising greenhouse gas emissions.

“In 2010, the first round of ships that went to Iraq operated on liquid fuel. Then we realised the world was moving in an environmentally friendly direction and we wanted to be a part of this.

All ships after this were therefore built with dual fuel engines to allow for cleaner fuel options.

“The modularity of the powership really helps us to reduce emissions. For example, in the case of a Ghana project, we were able to take the ship to the gas source – as opposed to the Ghanaians pumping the gas 300km to the ship – thus reducing the carbon footprint of the project. Flexibility also supports the immediate switch to gas and our aim to convert the whole fleet to LNG in the next 3-5 years.” She adds that the company wants to “improve our renewable portfolio.

Currently we have solar projects in Turkey and Ukraine but we want to build more global coverage of solar and battery storage applications as well.”

One of the main challenges to Karpowership is that of third party risk, especially as countries which need the power most are often those struggling the most financially. Also, according to Harezi, “there is a psychological barrier that needs to be broken.

People tend to think the powerships are temporary and must be more expensive because they’re on ships.

On the contrary, the physical and economic lifetime of ship is more than 25 years and we can provide really low cost power.”

This news is a total 1027 time has been read
Tags: Pamela Largue , Karpowership , Zeynep Harezi , FSRU