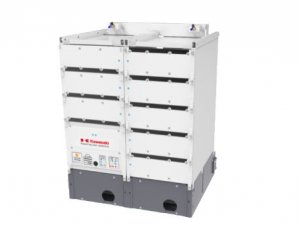 It can deliver beyond a million cycles with minimal capacity loss, according to Corvus Energy. The LiC technology was incorporated into the maritime-specific Blue Marlin product under a product development agreement with KHI, first announced in September 2019.

“It provides the best of both worlds—current-handling performance nearing a supercapacitor with improved energy density. When space is at a premium and high power is required for short amounts of time, the Corvus Energy Blue Marlin product is a fantastic solution.”

Corvus Energy plans to market the Blue Marlin ESS mainly in the Offshore segment for applications with short power fluctuations at a very high power. In particular, the company believes that there is significant potential for energy recapture for many of such operations, including heave compensation, drilling draw works, payload lowering, and similar high-power applications.

Specifically, for drilling rigs and vessels with heave compensation systems, this could mean that one or more diesel generators previously used to handle sudden variations in power can be turned off.

“The entire oil and gas industry increasingly commit to invest in green technology to reduce the carbon footprint of their operations,” says Geir Bjørkeli, CEO of Corvus Energy.

“By adding the Blue Marlin, we now offer a complete portfolio to improve energy efficiency in offshore vessel operations as well as rig topside applications.”

This news is a total 337 time has been read
Tags: Corvus Energy , Kawasaki Heavy Industries