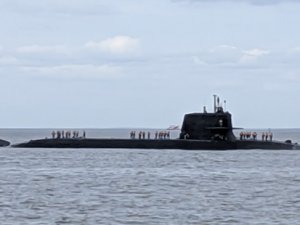 JS Tōryū (とうりゅう) SS-512 is the second submarine of the class to feature Li-Ion batteries.

The launching ceremony was held today at the KHI shipyard in Chuo-ku, Kobe. About 380 people from Japan’s Ministry of Defense and KHI participated in the ceremony. As per tradition, Admiral Hiroshi Yamamura, Chief of Staff of the JMSDF, cut the rope which started the launch process and send the new submarine in the water for the first time.

JS Toryu is the 12th and final Soryu-class submarine produced for the JMSDF (the 6th built by Kawasaki Heavy Industries, the other 6 having been built by Mitsubishi Heavy Industries). Tōryū (とうりゅう) means Fighting Dragon. The name of Toryu is derived from the famous scenic dragon fighting in Kato City, Hyogo Prefecture, where the torrent of the Kako River flows between strangely shaped rocks.

Twelve Soryu-class submarines are currently planned for the JMSDF. The design features improved underwater endurance thanks to lithium-ion batteries from the eleventh submarine in the class. Previous submarines use Lead-acid batteries. Designed by GS Yuasa, the high-performance Li-Ion batteries are said to store about double the power. The last two submarines of the class, fitted with the new battery technology, will probably serve as test-bed for the next generation of Japanese SSK.

This news is a total 446 time has been read
Tags: japan navy, japan submarine