Kazakhs get loan to save Aral Sea 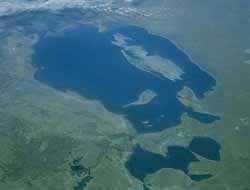 The Kazakhstan government has secured a multi-million dollar loan from the World Bank to help save the Aral Sea.

Kazakhs get loan to save Aral Sea

The Kazakhstan government has secured a multi-million dollar loan from the World Bank to help save the Aral Sea.

The money will be used to implement the second stage of a project aimed at saving the northern part of the sea.

The United Nations has said the disappearance of the Aral is the worst man-made environmental disaster.

But this new project could mean that at least part of the Aral - once the world's fourth largest inland body of water - will be saved.

It is an ambitious project aimed at reversing one of the world's worst environmental disasters.

As a result, the sea that many predicted could never return is already filling the desert.

The story of the Aral dates back to the 1970s, when the Soviet government diverted two main rivers feeding the Aral to irrigate cotton fields in Uzbekistan and Kazakhstan.

Starved of water, the sea began to shrink.

The desert spread, changing the climate, destroying the economy and the ecosystem, eradicating species and forcing thousands of people to leave the area.

By the 1990s only a quarter of the Aral Sea was left, but recently using a $68m loan from the World Bank, the Kazakh government built a dam that split the sea into two parts.

It did not solve the problem entirely. On the Uzbek side of the border, the southern part of the sea is still shrinking, but here in Kazakhstan officials say 40% of the sea has already returned.

Now using the new $126m loan from the World Bank, they plan to build a second dam which they hope will bring the water back to the deserted port of Heralsk.

Communities in the area are already feeling the impact. The fishermen are back in their boats, the clouds and the rain have returned and many across this impoverished region say the future no longer looks hopeless.

This news is a total 689 time has been read