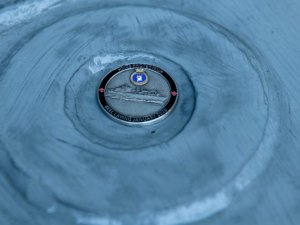 The ship is being built for the RCN through the National Shipbuilding Strategy (NSS). HMCS Protecteur and its sister vessel HMCS Preserver will replace the former Protecteur-class auxiliary oiler replenishment vessels.

As the fourth vessel to be designed and built by Seaspan under the NSS, the future HMCS Protecteur is said to be the largest naval ship by length ever built in Canada. Once completed, it will feature a length of 173.7 meters and a width of 24 meters. HMCS Protecteur will have a cruising speed of 15 knots, a top speed of 20 knots and a range of ~10,800 nautical miles.

As a warship based on the German Type-702 Berlin-class design, the JSS will include damage control and self-defense systems that will allow it to conduct a full range of military operations in high-threat environments.

In addition to providing critical at-sea replenishment, these multi-purpose warships will also be capable of integrating with any Canadian or allied naval task group, and will significantly extend the range and endurance of these groups through the provision of fuel, ammunition, aviation support, food, spare parts, and medical and dental care.

Construction of the early blocks of the first JSS began in June 2018, with the delivery of the first ship expected in 2023.

Vice-Admiral Art McDonald, Commander of the Royal Canadian Navy said that the keel laying marked another “critical milestone” in the renewal of the navy’s fleet.

“The Protecteur-class ships that the joint support ship project is delivering will build on our navy’s proud legacy of delivering excellence at-sea. Once delivered, these warships will be strategic assets that will once again afford Canada the sovereign capacity to deliver – even in harms way – an enduring at-sea replenishment and joint sustainment capability as well as significant Humanitarian Assistance & Disaster Relief capacity,” McDonald explained.

In 2019, Seaspan delivered the Sir John Franklin and the Capt. Jacques Cartier Offshore Fisheries Science Vessels (OFSVs) to the Canadian Coast Guard. These were the first two large vessels built and delivered under the NSS. Seaspan will deliver a third OFSV to the coast guard – the future John Cabot – in summer 2020.