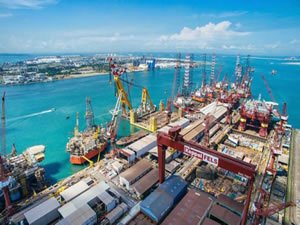 One of the most famous rig builders in the world is exiting the business. Singapore’s Keppel Corporation has announced that Keppel Offshore & Marine, which is up for sale, will undergo a major restructuring which will see it exit the offshore rig building

The comprehensive restructuring will see Keppel Offshore & Marine trim down significantly, and the company will no longer undertake any new projects requiring large upfront capex or without milestone payments. Existing projects will be completed, with the company currently holding around S$2.9bn ($2.18bn) worth of completed and uncompleted rig assets.

The business will be split into three divisions, separating construction and ownership of legacy drilling rig assets from core operations, which will be in the renewables and gas solutions sector where it currently has an order book of around S$3.3bn ($2.48bn).

Keppel delivered its first rig in the 1970s and at its peak was the world’s largest rig builder. The offshore downturn of the last decade has decimated earnings at the yard.

Keppel has also revealed that the company will progressively exit low value-adding repairs and other activities with low bottom line contribution to focus on higher value-adding work.

Loh Chin Hua, CEO of Keppel Corporation and chairman of Keppel Offshore & Marine, said, “The share of renewables and new energy solutions in the global energy mix has been growing rapidly, driven by environmental concerns as well as technological advancements and the declining cost of renewables. Natural gas, as a transitional fuel, is also projected to overtake oil as the world’s largest energy source in the years to come. To seize opportunities in this fast-changing environment, we are making bold and decisive moves to transform Keppel O&M to ensure that it remains relevant and competitive, and fully aligned to Keppel’s Vision 2030.

“We are also exploring inorganic options for the O&M business, but there is no assurance that any transaction will materialise. In the meantime, we believe that our organic restructuring of Keppel O&M will not only enhance its competitiveness, but also its attractiveness, if we were to undertake any inorganic action.”

Commenting on the news, Mike Meade, CEO of local offshore brokerage M3 Marine, told Splash: “It has been muted around the bazaars of Singapore for some years that Keppel were not making money on rig building. Their traditional decent margins were always on ship repair and conversion with the added benefit of better cashflow given prompt payments. The bittersweet pill of being the world’s biggest rig builder with high value, low margin, low deposit and yard financed newbuilds has been difficult to swallow, add to this the default situation since 2014 with rig owners going bust left, right and centre and leaving the yard with billions of dollars worth of rigs must have given them serious indigestion.”

Analysts at UOB Kay Hian, a local investment bank, welcomed the rig exit news. “In our view, exiting the rig-building business is positive, given our bearish sector view for the next 12-18 months at the very least,” UOB stated.

“This is another example of how commercial reality is running ahead of regulators and legislators. Oil exploration and production investment – especially offshore – is tumbling, while renewables investment is scaling up much faster than lawmakers could have supposed. Keppel is presciently reacting to worldwide trends,” Williams said.

“While it is sad to hear that Keppel is exiting this sector – one that they dominated for more than two decades – it is a courageous and timely decision. When we cannot change the direction of the wind, we must adjust our sails,” Sheshashayee told Splash today.

Keppel reported a full year loss of S$506m ($380m) yesterday, impacted by large impairments. It has also put its logistics business up for sale.

Attention now turns to Sembcorp Marine, Singapore’s other main rig builder, which has long been linked with a merger with Keppel to ride out the tough offshore scene.

This news is a total 3664 time has been read
Tags: Keppel , Offshore , Marine exits , rig building , focus on renewables