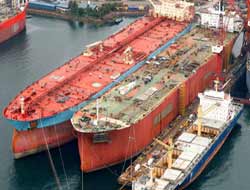 Keppel Shipyard has been awarded contracts for the conversion of two Floating Production Storage and Offloading (FPSO) units.

One is from SBM Holdings Inc SA (SBM), the other is from Emas Offshore Construction and Production Pte Ltd (Emas).

The conversion of the 268,865 dwt VLCC (previously FSO XV - DOMY) for SBM is expected to be completed and the FPSO will sail from the yard in the third quarter of 2008. On completion, the facility will produce up to 100,000 barrels of oil per day (bopd), and have a storage capacity of about 1.6 million barrelsl.

The FPSO unit will be leased by a SBM/MISC joint venture to the BC-10 Consortium operated by Shell for the development of the BC-10 field in tBrazilian waters of the Campos Basin. This field is expected to be one of the key milestones in the commercialization of heavy oil in Brazil's deepwaters.

Mr Nelson Yeo, Executive Director of Keppel Shipyard, said, "This is our tenth conversion project for SBM since the year 2000. We wish to thank SBM for their continuing confidence in Keppel Shipyard's ability to perform and deliver quality services all the time."

The major scope of work for the conversion includes accommodations upgrading, fabrication and installation of an internal turret mooring system, piperacks, modules supports, helideck and shipside sponson tanks as well as installation of the power generation system and topside process modules.

The second contract, awarded by Emas Offshore Construction and Production, a subsidiary of Ezra Holdings Limited, is for the conversion of a 127,533 mt shuttle tanker into LEWEK FPSO 1 for deployment in the Gulf of Thailand.

The vessel is expected to be completed in mid 2008.

Meanwhile, Keppel Nantong Shipyard in China has received an order for the construction of three 65-ton bollard pull twin-screw Azimuth Stern Drive (ASD) tugboats from Keppel Smit Towage Pte Ltd. These vessels are of the proprietary MTD 3265ST design developed by Keppel Singmarine's technology unit, Marine Technology Development (MTD). They are expected to be delivered between third quarter of 2009 and first quarter of 2010.

Keppel Philippines Marine, Inc (KPMI) has also sold two units of 45-ton bollard pull tugboats to Keppel Smit Towage. These two boats are being built in Keppel Batangas Shipyard and Keppel Cebu Shipyard in the Philippines and are expected to be completed by the third quarter of this year. KPMI delivered two similar tugs to Maju Maritime Ltd, a sister company of Keppel Smit Towage, in 2006.

This news is a total 1004 time has been read