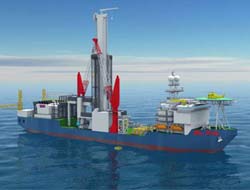 Singapore's Keppel Shipyard Limited, a wholly-owned subsidiary of Keppel Offshore & Marine Limited has been awarded a contract valued at about $100.3 mln for the integration and completion of a new build "Bully" drillship.

Singapore's Keppel Shipyard Limited, a wholly-owned subsidiary of Keppel Offshore & Marine Limited (Keppel O&M) has been awarded a contract valued at about SGD 145 million (about US$100.3 million) for the integration and completion of a new build "Bully" drillship. Keppel secured the contract with a company jointly owned by Frontier Drilling and Shell.

This is the second drillship of the "Bully" rig design awarded to Keppel by the same owners. The first "Bully" drillship was awarded in June 2007 with delivery by fourth quarter 2009.

The new hull will be built in China and is due to arrive at Keppel Shipyard in the first quarter of 2009. The drillship is expected to be delivered by the second quarter of 2010.

Frontier Drilling, in which the Carlyle Group is an investor, is domiciled in Norway with administrative offices in Houston, Texas. It says it seeks to compete in market segments such as the Arctic that are not dominated by larger competitors and where its assets offer customers cost savings and a competitive advantage.

GustoMSC designed the "Bully" as a customization of its proprietary PRD12,000 design drillship, and adapting the unit for a Huisman-Itrec MPT (Multi-Purpose Tower) drilling system.

The "Bully" rig design offers a flexible, smaller but highly capable, vessel suited for deepwater and arctic drilling, while reducing the construction and operational costs compared to other deepwater drill ships of similar capacity. The first vessel for the Shell/Frontier Joint Venture is expected to be delivered by early 2010.

GustoMSC's scope included the customization of its original PRD12,000 design and ice tank testing. The innovative design offers flexibility in rapid deployment and will be capable of drilling with surface blow-out preventers in up to 12,000 ft water depth. The vessel will feature an ice class hull allowing for safe and efficient operation in arctic conditions and will have Dynamic Positioning (DP-2) capabilities. Through the use of these innovative solutions, the design calls for less crew and fuel. The new drillships have a significantly reduced environmental impact due to lower emissions through reduced fuel consumption, high efficiency/low emission engines and lower steel use for construction.

"We thank Frontier and Shell for their trust and confidence in Keppel Shipyard in awarding us the integration and completion phase of their first and now their second newbuild drillship, the Bully 2."

In addition to the Bully drillship contracts with Frontier and Shell, Keppel Shipyard is currently working on the refurbishment and upgrading of drillship "Frontier Phoenix" for Frontier due for delivery in the third quarter 2008. 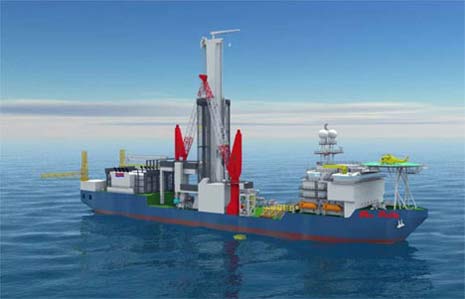