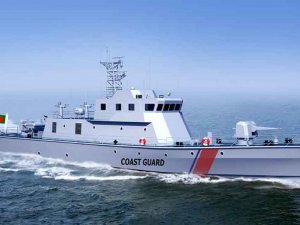 Bangladeshi Navy said that a keel-laying ceremony for the 50.4 m-long vessels, had been held the previous day at the company's facilities in Khulna. The ceremony was attended by Admiral Aurangzeb Chowdhury, the BN's chief of naval staff, among others.

Bangladesh's Khulna Shipyard Ltd has begun construction of the second batch of five Padma-class patrol vessels on order for the Bangladeshi Navy (BN).

The service already operates five vessels of the class, all of which entered service in 2013. This first batch was built in Bangladesh by BN-owned Khulna Shipyard in collaboration with mainland China's Hudong-Zhonghua Shipbuilding through the China Shipbuilding & Offshore International Corporation (CSOC).

The first batch of ships is equipped with a pair of 37 mm naval guns and another pair of 20 mm anti-aircraft guns. Coast guard orders and second batch of navy ships carry one 30 mm Remote controlled Gun & one 12.7 mm heavy machine gun. All these ships can lay mines and can carry MANPADs.

The launch of the second batch paved the way for the Bangladesh Navy to soon deploy its own design. Built at the Khulna Shipyard, the design is an offshore patrol vessel that displaces 350 tonnes. The ships are 165.35 feet long, with a beam of 24.61 ft and a draught of 13.45 ft. The ships can carry out missions lasting up to seven days at a time. They have a complement of 45 personnel with a top speed of 23 knots. Each of the ships is armed with Norinco twin 37 mm naval guns and two 20 mm guns.

The ship has a primary mission of protecting both the fishing fleets and the oil and gas fields and other Economic Zones. In addition, the ships have limited capability in an anti-submarine role. In future, it is expected that the rest of the ships are going to be equipped with SSM.

Separately, the BN announced on 22 December that it had decommissioned three days earlier its Chinese-made Yuch'in-class (Type 068/069) coastal survey ship BNS Tallashi, which entered service in 1983. NATO’s SNMCMG1 changes commandCommand of Standing NATO Mine Countermeasures Group One (SNMCMG1) has been transferred to Commander Henning Knudsen-Hauge of the Royal Norwegian Navy.