Kitack Lim to Lead IMO for Another 4 Years 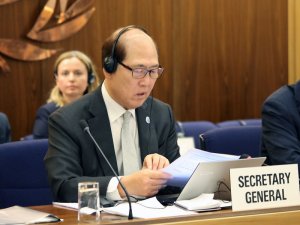 The Assembly of the International Maritime Organization (IMO) has approved the renewal of Kitack Lim’s appointment as Secretary-General of IMO.

He has been reelected for a second four-year period beginning January 1, 2020.

In June 2015, he was first elected Secretary-General for a four-year period that began in January 2016. Before that, he served as President of the Busan Port Authority.

Throughout his tenure, Lim helped steer the international maritime industry to commit to ambitious environmental initiatives including the 2020 sulphur cap, the 2050 GHG goal, the Ballast Water Management Convention, and the Polar Code, among others.

Born in the Republic of Korea, Lim majored nautical science at the Korea Maritime and Ocean University (KMOU) in 1977. In addition, he obtained a Master’s Degree at the Graduate School of Administration, Yonsei University, in 1990.

Lim then studied maritime administration at the World Maritime University (WMU), graduating with a master’s degree. From 1995 he attended a doctoral program for international law at KMOU, completing course work in 1998.

This news is a total 1070 time has been read
Tags: IMO, Kitack Lim.

DNV GL: climate change will not wait for pandemic to pass“All these initiatives are not stopping because of Covid-19. IMO are always working on this. Working groups are now meeting; there are team meetings to bring this forward,” he said.

Preparing for IMO’s new engine emissions rulesA major change in emissions regulations is coming, which will likely have a considerable impact on tug and workboat design, construction and operation

IMO’s 2050 decarbonisation goals can be achieved, says StopfordThe IMO’s target of reducing shipping’s carbon emissions by at least 50% by mid-century can easily be achieved and even surpassed, according to shipping economist and non-executive President of Clarkson Research, Martin Stopford.