Kjaedegaard is the new president 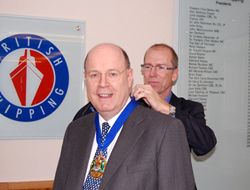 Jesper Kjaedegaard, who has more than 30 years of experience with A P Moller and the Maersk Group, has been appointed President of the UK Chamber of Shipping.

Jesper Kjaedegaard, who has more than 30 years of experience with A P Moller and the Maersk Group, has been appointed President of the UK Chamber of Shipping.

The announcement, made at the Chamber"s Annual General Meeting was followed by a forthright speech from Jesper Kjaedegaard to mark the start of his term as president.

The new President said that the Chamber"s and shipping industry"s priorities over the next year would be safety, recruitment, reducing carbon emissions and further improving the Chamber"s efficacy as a voice for the industry.

Highlighting both his commitment to ensuring safety remained at the top of the agenda for shipowners and the need for the regulatory environment to reward rather than penalize quality shipping, Mr Kjaedegaard said ?there is a real risk that some ship-owners, operating in financial survival mode, may resort to spending shortcuts which could compromise safety. In my view, this would be both madness and bad business.?

He went on to say that while the number of young people training as merchant navy officers in the UK has increased over that past few years, further work was needed to make the employment of UK junior officers cost competitive before companies could recruit and train as many as they would wish. A joint submission with the unions Nautilus and RMT was last week presented to the Secretary of State for Transport suggesting how such support might be provided.

Turning to carbon emissions, Mr Kjaedegaard made it clear that the Chamber"s bold position on emissions trading will be maintained, since trading was ?the only option that offers the certainty of real, actual reductions in emissions?.

The Chamber will also focus on the need for international rather than regional regulation of the industry and the need for a strong voice for the European countries that have shipping industries within the EU.

Elected as the Chamber"s first non-British President in its 131-year history, Jesper Kjaedegaard acknowledged that the UK shipping industry, with other shipping industries around the world, is enjoying "interesting times" as a result of the global financial turmoil.

As a result, he predicted that the rest of 2009 will be tough, with 2010 looking similar, however it remained vital that the Chamber continues to stand by the principles of quality shipping, so that it can continue its massive contribution to world trade ? transporting the world"s goods in the most environmentally friendly way and offering high-quality careers to develop the professional seafarers of the future.

This news is a total 6870 time has been read