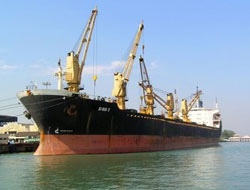 Kochi Port is all set to play a pivotal role in the economic development of Kerala in view of a series of major green-field infrastructure projects, including the Vallarpadom International Container Transhipment Terminal, fast becoming a reality.

Kochi Port is all set to play a pivotal role in the economic development of Kerala in view of a series of major green-field infrastructure projects, including the Vallarpadom International Container Transhipment Terminal, fast becoming a reality.

What is significant is that creation of such modern infrastructure at the Port premises will place the least demand on society for an investment of Rs 8,000 crore, Mr C. Unnikrishnan, Deputy Secretary of the port, said in a conceptual note on the role of Kochi Port in the economic and industrial development of Kerala.

The manufacturing sector, which is growing at less than 2 per cent in the State, will get a major boost from the outsourced manufacturing activity that is to emerge in the Port-based Special Economic Zone.

These activities are expected to be positively supported through better supply-chain linkage. Better logistics support will usher in industries in the periphery in import-processing-export-related activities.

Today, Kochi Port spreads over 827 hectares. It has a water frontage of 7.5 km. The Port has connectivity to the hinterland through NH 47, NH 17 and NH 49. Rail links to the Konkan and Southern Railway also give key rail access to its hinterland. An inland water way connecting to Kollam and Kottappuram on either side is being developed by the Inland Waterways Authority of India (IWAI).

But most importantly, what will make the Port a key driver of the State's economy will be the setting up of the Vallarpadom International Container Transhipment Terminal (ICTT), in build-operate-transfer (BOT) mode and a special economic zone (SEZ) through an investment of Rs 2,118 crore, with appropriate support of new rail link at a cost of Rs 246 crore and road link at a cost of Rs 557 crore.

The facilitation of mother-ship access to the port should bring down the freight cost of exports from the region significantly. But there is a long way to go if exports are to pick up, especially traditional agricultural exports of South India, such as spices, mainly because they have not inducted the required technology input for product development to meet current market demands.

Logistic tools, such as radio frequency identification (RFID), insisted upon by US and European purchasers, have also not been introduced.

In this context, a container terminal in conjunction with SEZ would promote a clustering effect to share infrastructure such as quality testing laboratories, packaging industry and radiation technology for preservation. The anticipated value addition facilities will also support other traditional export sectors such as marine exports where the fall in income due to raw material shortage would be compensated by an increase in the proportion of value addition.

The Transhipment terminal will also generate a host of logistic activities. At least 30 high-end logistic agencies have have incorporated Kochi in their master plan for commencing operations.

The trucking terminals and supply chain nodes have started making themselves visible in Kochi, and can emerge as integrated logistic parks, one-stop centres offering warehousing, packaging services, freight forwarding and even transport-related services.

According to the note, the development of Kochi into a logistic hub will support the entire South Indian export sector where it is estimated that poor logistics is increasing logistic costs by 4 per cent.

The creation of direct jobs in the logistic hub and the spillover effects in the immediate vicinity will be substantial. This will turn out to be a much needed solution for 84 per cent of its employment-seeking population numbering about 39 lakh, who are matriculate and above.

Kerala's tourism sector will get a boost with a modern cruise terminal coming up adjacent to the port.
Meanwhile, the proposed LNG Terminal will bring in much needed eco-friendly and economic fuel. The lower price of LNG should lower power cost and produce a ripple effect in input costs of SMEs.

Thus, the ongoing and proposed infrastructure development will result in a big leap in the State's overall economy.