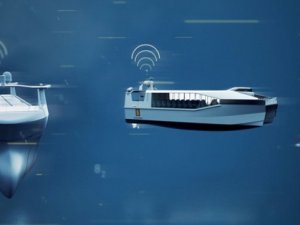 On Tuesday, shipping conglomerate Wilhelmsen Group announced that it is launching Massterly, an autonomous-shipping joint venture with technology firm Kongsberg.

"Norway has taken a position at the forefront in developing autonomous ships," said Thomas Wilhelmsen, Wilhelmsen group CEO. "[Through] Massterly, we take the next step on this journey by establishing infrastructure and services to design and operate vessels, as well as advanced logistics solutions associated with maritime autonomous operations. Massterly will reduce costs at all levels."

The joint venture will cover autonomous vessel construction, management and operation, using new land-based control centers in Norway. While the technology is still in the early stages of commercialization, Wilhelmsen cited the autonomous, all-electric container feeder Yara Birkeland as an example of autonomy's promise. The 120 TEU, Kongsberg-designed feeder will run between three ports in southern Norway, all within about 30 nm of each other and all within the nation's territorial seas. Delivery is expected in 2019, with fully autonomous operation by 2020.

"At first, short sea shipping will use autonomous ships. This also implies increased competitiveness to move transport from road to sea. The gains are increased efficiency and reduction of emissions," said Thomas Wilhelmsen in a statement. "For Norway as a maritime nation, this will be an important contribution to reach the UN sustainable development goals."

Not all industry players are as convinced of the technology's potential. Kongsberg competitor Transas (now part of Wartsila) asserts that retaining the ship's crew while adding more automation is the best way forward. Maersk CEO Soren Skou recently weighed in with a similar message: "I don’t expect we will be allowed to sail around with 400-meter long container ships, weighing 200,000 tonnes without any human beings on board,” he told Bloomberg in February. “I don’t think it will be a driver of efficiency, not in my time.”

This news is a total 573 time has been read
Tags: Kongsberg and Wilhelmsen Launch Autonomous-Shipping JV