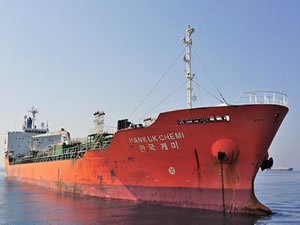 Korean naval forces have arrived near the Strait of Hormuz as dialogue gets underway to free the Hankuk Chemi and its 20 crew. The vessel was taken by Iran’s Revolutionary Guards yesterday, claiming pollution charges, something the ship’s owner, Busan-bas

DM Shipping officials today said today that Revolutionary Guard troops (pictured via Iranian media) had stormed the vessel and forced it to change course and travel to Iran. Iranian armed forces have intercepted a number of tankers over the past 18 months.

The South Korean foreign minister, Kang Kyung-wha, said her priority was to “verify the facts and ensure the safety of the crew members”. She added: “We have been trying to figure out what happened through the Iranian embassy in South Korea and the South Korean embassy in Iran and are continuing to make efforts to address the situation.”

The tanker had been underway eastbound at 12.5 knots prior to the incident from the Petroleum Chemical Quay, Jubail, Saudi Arabia, operated by Sabtank.

The US State Department yesterday called on Iran to immediately release the tanker, saying that the seizure is part of Teheran’s attempt to press the international community into lifting sanctions on the country.

The vessel detention comes five days after a limpet mine was discovered on a suezmax tanker off Iraq.

“The placement of mines and the detention of vessels within the Persian Gulf and Gulf of Oman is activity previously attributed to Iranian forces. The IRGC and wider Iranian forces have a well-established practice of combining both attributable and non-attributable activity to control security narratives in the region. By creating conditions of insecurity, Iran seeks to destabilise existing rules of law and order, challenging the Saudi and American coalitions which militarily control much of the Middle East,” analysis from security firm Dryad Global suggested.