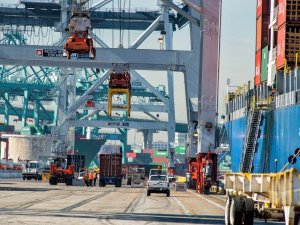 The U.S. West Coast ports of Long Beach and Los Angeles will both mark the year 2014 as the third busiest in their respective histories, despite the congestion issues that have plagued the West Coast ports for the last eight months.

Container volumes at the Port of Los Angeles increased 6 percent in 2014 over the previous year, with total volumes reaching 8,340,065 Twenty-Foot-Equivalent Units (TEU). It was the third busiest year in the Port’s history, just behind 8.4 million TEUs in 2007 and 8.5 million TEUs in 2006.

Cargo container trade at Long Beach climbed 1.3 percent in 2014, bringing the Port its third-busiest year ever behind the peak years of 2006 and 2007.

”This is the third straight year that imports have climbed. We could not have achieved our third-busiest year in our history without the support from our longtime business partners,” said Jon Slangerup, Port of Long Beach Chief Executive.