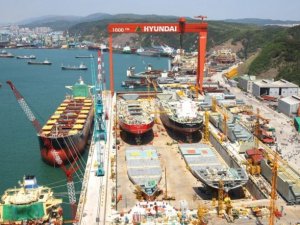 The labor unions of Hyundai Heavy Industries declared 3-day strike due to failed wage negotiations and a proposed split of the firm’s non-shipbuilding business, as well as the closure of the dock in the southern coastal region Gunsan.

The labor unions’ workforce of 15,000 employees started a strike for eight hours from 8 a.m. on Thursday, which will last also on Friday and Monday. The walkout marked the first all-out strike in Hyundai Heavy Industries since 1994. The operations of the world’s largest shipbuilding company will not be serious affected during the walkout, as workers from smaller contractors account for nearly 70% of the firm’s entire workforce.

One of the basic problems for labor unions is the closure of the dock in Gunsan shipyard in North Jeolla Province, which is expected to be completely emptied after it delivers its last ship at the end of June. A number of subcontractors near the Gunsan shipyard have reportedly been closing their doors one after another since October.

“I do not understand. Union workers in the Ulsan shipyard also saw one of our docks has halted its shipbuilding operation since July due to the order cliff. Two more docks are likely to do the same by the end of July if the trend continues”, said officials of Hyundai Heavy Industries.

The 3-day strike came after a series of apparently not so successful wage negotiations between the company and unionized Hyundai Heavy employees that began last year.

Since July, Hyundai Heavy Industries has been carrying out a restructuring process that includes asset sales and layoffs. Nearly 2,000 workers left the company under a voluntary retirement program.

This news is a total 769 time has been read
Tags: Labor unions of Hyundai Heavy Industries declared 3-day strike