LADY SIRIA suffered engine failure and collided with a pontoon 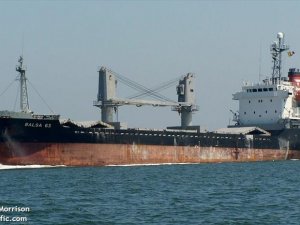 The Belize-flagged Cargo Ship, LADY SIRIA suffered engine failure and collided with a pontoon during the morning hours of October the 30th, while transiting up the Danube River.

DISABLED VESSEL CRASHES AGAINST PONTOON WHILE TRANSITING THROUGH THE DANUBE

The incident occurred near the port of Tulcea, Romania, in the Saint George branch of the Danube Delta.

The vessel had been en route from Galati, Romania to Italy, loaded with a cargo of maize, when it started experiencing technical difficulties. The crew lost control of the ship - they tried to drop the anchor in order to force the vessel to a halt, but the ship went on to crash against a pontoon jetty that had been situated near the riverbank.

The jetty itself was pushed towards the bank, and rested on the riverside, partially submerged.

Thankfully there were no injuries during the collision and no serious damages were reported.

The Lady Siria had to interrupt her transit and moved to an anchorage upstream, where she remains anchored as of writing.

The traffic lane along the river remained open following the incident. There were no signs of environmental pollution in the area.

Local authorities have opened an investigation into the collision so as to determine the cause of the crash.

This news is a total 217 time has been read