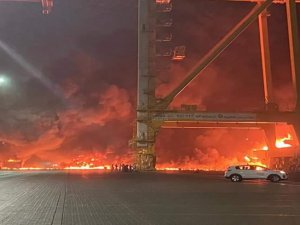 A fire caused by an explosion within a container on board a ship at Jebel Ali Port has been brought under control, the Government of Dubai Media Office has said.

No casualties have been reported in the incident that happened late on Wednesday.

There are reports of a large explosion and fire at the Jebel Ali Port in Dubai.

The government reports the fire started in a container onboard a ship anchored at the port. “A Dubai Civil Defense team is working to put out the blaze,” Dubai’s Media Office said in a tweet confirming the accident.

“The fire is under control and there are no deaths or injuries as a result of the accident at Jebel Ali Port,” the government said in an update.

It also posted a video showing a fire in the forward portion of small containership docked at the port.

The ship involved appears to be the MV Ocean Trader, a 90-meter containership registered in Comoros. AIS ship tracking data shows the Ocean Trader had docked at the port earlier in the day on Wednesday.

Jebel Ali Port authorities: “We are taking all necessary measures to ensure the normal movement of ships in the port continues without any disruption.”