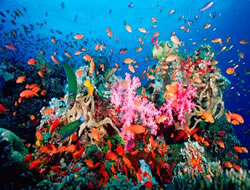 Not only physical forces such as tides and sand transport but also small organisms such as molluscs, tube worms and sea urchins have a large impact on seabed formation.

His research focused on shallow, sandy seas, such as the North Sea, where many organisms are active on the seabed. By creating, modifying and maintaining their own habitat, they affect their surroundings. That is why they are sometimes called ecosystem engineers. It was already known that interaction between these ecosystem engineers and physical systems is an important factor in seabed formation. However, this is now being researched and substantiated for the first time in a shallow sea.

To do this, it is necessary to have a thorough understanding of the physical and ecological systems in seabeds. Borsje used various models to calculate the influence of small organisms on the seabed. He checked the results by performing both lab experiments and field research, thus creating a reliable model.

Borsje: ‘All the knowledge acquired during this research can be put into practice. We humans interfere in various ways with the seabed; we lay cables in it or install windmills and so on. The effects such activities have on the physical system were known but up until now, the ecological consequences could not be determined precisely enough. This study has made that possible, and is important when, for example, the permit for a project needs to be extended.’ This research was carried out jointly by Deltares, the University of Twente and NIOZ in Yerseke.

This news is a total 6289 time has been read