Large ocean view for the guest 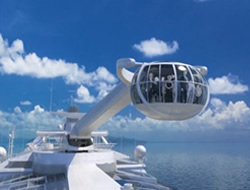 The second ship, 'Anthem of the Seas', in the new Quantum class will become the most technologically advanced cruise ship ever to be based in Europe, when it is launched in spring 2015

The name of the first home port for the 4,108-guest double occupancy Anthem of the Seas currently being built at the Meyer Werft shipyard in Papenburg, Germany was revealed at an exclusive event for media and special guests at the Heron Tower in London, UK.

"Our business has a long history with the port of Southampton, and over the last ten years we have annually increased the number of cruise opportunities from the port," said Adam Goldstein, president and CEO, Royal Caribbean International. "We are now eyeing more growth with the introduction of Anthem of the Seas to the UK market in spring 2015. Our commitment to providing unrivalled holiday experiences onboard the world's most advanced and activity-packed ships is unwavering."

The Quantum class of ships will take a dramatic leap forward, introducing more game-changing "firsts at sea" such as a skydiving experience and the 'North Star', an engineering marvel featuring a jewel like capsule that extends 300 feet above the ocean and over the sides of the ship to deliver 360-degree views for guests

This news is a total 1228 time has been read