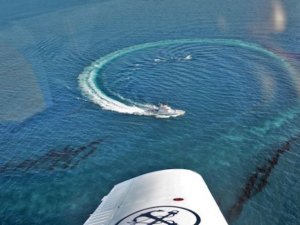 Greek authorities are working to cleanup a large oil spill that has impacted the shoreline of a Greek island near Piraeus this after a tanker sank in area early Sunday morning.

The 91-meter Greek-flagged tanker Agia Zoni II was carrying 2,200 metric tons of fuel oil and 370 metric tons of marine gas oil when it sank on September 10 near Salamina Island, the largest Greek island in the Saronic Gulf.

Greek officials have reported that the ship’s cargo holds have been sealed but a large amount of oil was leaked, some of which has washed ashore along Salamina.

By Wednesday, the oil spill had spread several miles to the Athens Riviera, home to some of Greece’s most popular beaches.

The ship’s captain and engineer were arrested following the incident and later released, the Hellenic Coast Guard reported.

A large operation to contain and cleanup the oil is ongoing.

The Piraeus Port Authority has launched a preliminary investigation into the incident.

This news is a total 1000 time has been read
Tags: Large Oil Spill Washes Ashore in Greece After Tanker Sinks